Should All Students in US Learn the Same Things?

Update Required To play the media you will need to either update your browser to a recent version or update your Flash plugin.
By VOA
2011-6-8 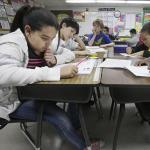 More than forty of the fifty American states have approved what are known as the common core state standards. These are lists of content that students are supposed to learn at each grade level from kindergarten to high school.

Acceptance is voluntary. But acceptance helped states that entered President Obama's four-billion-dollar "Race to the Top" competition for school reform.

The standards are for English language arts and math. More subjects may come later.

Supporters say the standards provide clear goals to prepare students to succeed in college and in jobs. But critics of national standards say the idea goes against one of America's oldest traditions -- local control of education.

Political conservatives generally oppose federal intervention in schools. Yet it was a Republican president, George W. Bush, who expanded testing requirements to show that public schools are making yearly progress.

Still, opponents of national standards call them "one-size-fits-all." They say the idea does not make sense for a country as large and diverse as the United States.

One of those opponents is Bill Evers at the Hoover Institution at Stanford University in California. He was an assistant education secretary under President Bush.

BILL EVERS: "We are having Washington, DC, having control and final say over, and supervision over and direction over, what is happening in the classrooms of America, in the public schools. Most changes, most positive influences have bubbled up from below.

"So it's closing the door on innovation by locking in a national, uniform bureaucratic system. But the states don't have a problem in setting their curriculum -- they've been doing it ever since there've been public schools."

Richard Reilly was education secretary to President Bill Clinton, a Democrat. Mr. Reilly says the federal government is not forcing the common core standards on states.

RICHARD REILLY: "Conservatives would be concerned if we had federal-mandated common core standards. That's not what we have. It's a state-driven measure. High standards, challenging work for young people across the country. To be challenged to do and be the same, and not one way in Texas and another way in South Carolina."

Mr. Reilly says when he served in the nineteen nineties, he pushed states to develop their own statewide standards. But some of those standards were not very strong, he says, so he believes national standards are needed.

BILL EVERS: "If we put a bureaucratic hand on this, we will stifle the capacity for modern technology to give us a better shot at the students learning the material."

He says schools should worry less about a common curriculum and more about improving teacher quality.

And that's the VOA Special English Education Report. We'll have more about this debate next week. You can find a link to the common core standards at 51voa.com. I'm Christopher Cruise.