How Failure Can Lead to Long-Lasting Knowledge

Update Required To play the media you will need to either update your browser to a recent version or update your Flash plugin.
By Avi Arditti
2010-9-8 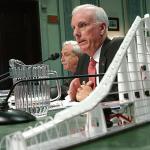 Photo: AP
Retired Navy Admiral Harold Gehman served as chairman of the Columbia Accident Investigation Board, which sought lessons from the 2003 shuttle disaster

No one likes to make mistakes. But a new study says organizations learn more from their failures than their successes, and keep that knowledge longer.

One of the researchers was Vinit Desai, an assistant professor at the University of Colorado Denver Business School. He worked with Peter Madsen from the Marriott School of Management at Brigham Young University in Utah.

They did not find much long-term "organizational learning" from success. It is possible, they say. But Professor Desai says they found that knowledge gained from failure lasts for years.

He says organizations should treat failures as a learning opportunity and not try to ignore them.

The study looked at companies and organizations that launch satellites and other space vehicles. Professor Desai compared two shuttle flights.

In two thousand two, a piece of insulating material broke off during launch and damaged a rocket on the Atlantis. Still, the flight was considered a success.

Then, in early two thousand three, a piece of insulation struck the Columbia during launch. This time, the shuttle broke apart on re-entry and the seven crew members died. NASA officials suspended all flights and an investigation led to suggested changes.

Professor Desai says the search for solutions after a failure can make leaders more open-minded. He points to airlines as an example of an industry that has learned from failures in the past.

He advises organizations to look for useful information in small failures and failures they avoided. He also urges leaders to encourage the open sharing of information. The study appeared in the Academy of Management Journal.

The mistakes we learn from do not have to be our own. We recently asked people on our Facebook page to tell us a time they had done something really silly.

Fabricio Cimino wrote: Not long ago I wanted to watch TV, but it wouldn't turn on, so I did everything I could to start it. Thirty minutes later my mum shows up and, passing by, says to me "Did you try plugging it?" I was like "I'm just dusting, Mum!" so she wouldn't notice how dumb I am sometimes!

Bruno Kanieski da Silva told about a time he looked everywhere for his key. It was in his pocket. He wrote: I always promise I will never do it again, but after a few weeks ... where is my wallet? For sure it will be in a very logical place.

You can find more comments like these on Facebook at VOA Learning English. And that's the VOA Special English Education Report, written by Avi Arditti. I'm Steve Ember.