Update Required To play the media you will need to either update your browser to a recent version or update your Flash plugin.
By June Simms
2010-10-16 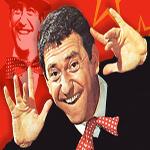 The "Soupy Sales Show" was a huge success.

DOUG JOHNSON: And I'm Doug Johnson with PEOPLE IN AMERICA in VOA Special English. Today, we tell about comedian Soupy Sales who made people laugh for more than forty years.

BARBARA KLEIN: Soupy Sales was an actor, and a radio and television performer. He was perhaps best known for getting hit in the face with pies.

SOUPY SALES: "I've always been a devotee of slapstick, and it sort of emphasizes sometimes jokes and you know I think everybody really deep inside would sometime or another would like to throw a pie or get hit with a pie."

BARBARA KLEIN:During the course of his career, he said he was hit with a pie twenty thousand times. He was equally well known for throwing pies at other famous people. Among those were the entertainers Frank Sinatra, Sammy Davis, Junior and Trini Lopez. All three men were hit with pies during a nineteen sixty broadcast of "The Soupy Sales Show." 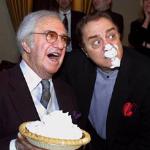 Comedian Soupy Sales with fellow comedian Pat Cooper during a party honoring his 75th birthday at the Friar's Club in New York.

Soupy Sales was born Milton Supman in nineteen twenty-six in Franklinton, North Carolina. He was the youngest of three sons born to Irving and Sadie Supman. His older brothers were nicknamed "Hambone" and "Chickenbone." Milton became known as "Soupbone," based on a common mispronunciation of his last name.

The nickname "Soupbone" was later changed to "Soupy." "Sales" was added years later, based on a nineteen twenties comedian named Charles "Chic" Sale.

DOUG JOHNSON: Milton's father died when he was five years old. His mother moved the family to Huntington, West Virginia. The young man was voted the most popular boy in high school.

Milton served in the United States Navy during World War Two. He entertained his shipmates with comedy routines broadcast over the ship's sound system.

When he returned to West Virginia, he earned his Bachelor of Arts degree in journalism from Marshall College in nineteen forty-nine. ?While attending school, he spent his evenings performing in nighttime social clubs as a comedian, dancer and singer.

Soupy Sales began his career as a scriptwriter and disc jockey who played records on the radio. He became one of the most popular radio personalities in Huntington, West Virginia. He began his television career in nineteen fifty with the show "Soupy's Soda Shop." It was one of the nation's first dance shows for teenagers on television.

Both shows lasted less than a year. Soupy Sales was said to have left the shows for health reasons. In his words: "They got sick of me."

Several months later he moved to Cleveland, Ohio and began another television show called "Soup's On." Soupy Sales received his first pie in the face on that show. That show was also cancelled. But the pie-throwing later became a regular part of Soupy Sales' comedy act.

In nineteen fifty-three he started another television show in Detroit, Michigan. "Lunch with Soupy" became an instant success. It was the first comedy show that appealed to all ages, attracting children, young people and adults alike. 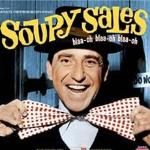 Soupy Sales would dance crazily around the stage wearing a black sweater, a big, funny-looking bow tie and a black top hat. He would tell an endless string of jokes, make up funny stories and ask stupid questions.

DOUG JOHNSON: An unusual group of characters joined him on the show, including two dog puppets. Viewers could only see the dogs' large paws. Black Tooth was known as the nicest dog in the United States. Black Tooth was famous for pulling Soupy Sales off the stage to give him loud, noisy kisses. His co-star, White Fang, was considered the meanest dog ever. White Fang was known for throwing pies.

Pookie the Lion was another show favorite, as was Hippy the Hippo. Other characters on the show included Soupy's girlfriend, Peaches, played by Soupy Sales himself. And Philo Kvetch was a private detective who was not too smart.

The show later became known as "The Soupy Sales Show" and it was a huge success. The show moved to Los Angeles, California in nineteen fifty- nine. It became one of the city's top rated shows before moving to New York City in nineteen sixty-four.

BARBARA KLEIN: One of the most famous broadcasts of the "The Soupy Sales Show" aired on New Year's Day, nineteen sixty-five. Soupy jokingly asked children watching the show to find where their parents kept their money. He asked them to send him the green pieces of paper with pictures of men with beards.

The comedian later talked about the incident during a comedy performance at a comedy club in New York.

SOUPY SALES: "Hey kids, I said, last night was New Year's Eve and your mom and dad were out having a good time. And it's only right cuz they work hard all year long. They're probably still in the bedroom sleeping. I said what I want you to do is tip toe into the bedroom, but don't wake them up. And you'll probably see your mom's pocketbook on the floor and your dad's pants. But don't wake them up. I said I want you to go in your mom's pocketbook and your dad's pants and you'll see a lot of green pieces of paper with pictures of guys with beards. I said what I want you to do is take those green pieces of paper and put them in an envelope and on the envelope you write Soupy Sales."

BARBARA KLEIN: A woman who had seen the show complained to federal communications officials. She said that Soupy Sales was urging children to steal money from their parents. The television station owners suspended him for a week. But, the incident made him even more popular with his fans. He later reported that he had received only a few real dollar bills. He said he donated the money to charity. 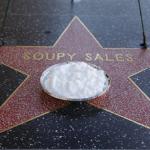 A pie is left on the star of Soupy Sales on the Hollywood Walk of Fame in Los Angeles on Friday, Oct. 23, 2009.

DOUG JOHNSON: Soupy Sales was also a huge fan of jazz. During his time in Detroit he hosted a nighttime music and comedy show called "Soupy's On." Some of the most famous jazz musicians in the world appeared on his show. Among them were Duke Ellington, Dizzy Gillespie, Chet Baker, Ella Fitzgerald and Detroit native Miles Davis. Charlie Parker also appeared on the show. His song "Yardbird Suite" became the theme song for "Soupy's On."

BARBARA KLEIN: During his career, Soupy Sales also made regular appearances on "The Tonight Show." And he appeared on popular television game shows. They included "What's My Line," "To Tell the Truth," "Hollywood Squares" and "The Match Game." He also appeared on Broadway, starred in several movies and even tried his luck at music.

He released two albums in nineteen sixty-five. One was called "Spy with a Pie." The other was "Soupy Sales Sez Do the Mouse and Other Teen Hits." Both albums were on the Top Two Hundred Albums Chart in Billboard Magazine. His single "Do the Mouse" sold hundreds of thousands of copies. Soupy Sales created a new dance called The Mouse which he often performed on his show.

DOUG JOHNSON: In the late nineteen eighties, Soupy Sales had a radio show in New York. His new show aired between two other radio personalities known for their sometimes shocking behavior, Don Imus and Howard Stern.

In two thousand three, Soupy Sales told his life story in a book called "Soupy Sez! My Zany Life and Times." It became a best-selling autobiography.

And in two thousand five he received a star on the Hollywood Walk of Fame. The comedian, actor, radio and television performer died in two thousand nine. Soupy Sales was eighty-three years old. We leave you with his song "Do the Mouse."

DOUG JOHNSON: And I'm Doug Johnson. You can learn about other famous Americans on our website, 51voa.com. You can also find us on Facebook, YouTube and Twitter at VOA Learning English. Join us again next week for PEOPLE IN AMERICA in VOA Special English.