An Archive of English, Spoken in Many Different Accents

Update Required To play the media you will need to either update your browser to a recent version or update your Flash plugin.
By VOA
2011-8-3 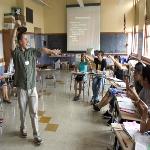 Steven Weinberger is the director of linguistics in the English Department at George Mason University in Fairfax, Virginia. Professor Weinberger says students in his beginning phonetics class are mostly interested in teaching English as a second language. They wanted to study how non-native speakers pronounce different sounds.

STEVEN WEINBERGER: "So we sent the students out to record non-native speakers, and we compared those speakers to each other and to native speakers of English."

Professor Weinberger wrote a paragraph for all of the speakers to read. The paragraph uses common words but contains almost all of the sounds used in English. Here is that sixty-nine-word paragraph read by our own Bob Doughty:

BOB DOUGHTY: "Please call Stella. Ask her to bring these things with her from the store: Six spoons of fresh snow peas, five thick slabs of blue cheese, and maybe a snack for her brother Bob. We also need a small plastic snake and a big toy frog for the kids. She can scoop these things into three red bags, and we will go meet her Wednesday at the train station."

In nineteen ninety-nine, Professor Weinberger put the recordings online. The Speech Accent Archive is for anyone who wants to compare and analyze the accents of different English speakers.

For example, here is a thirty-two-year-old Iraqi man:

IRAQI MAN: "Please call Stella. Ask her to bring these things with her from the store."

And here is a twenty-three-year-old woman from Eritrea:

Some people think the archive would be better if it included natural speech -- people talking freely, (not just reading the same words. )Professor Weinberger recognizes the strengths and weaknesses of his site.

STEVEN WEINBERGER: "The biggest plus, of course, is that it is so uniform that you can immediately compare a Kiswahili speaker to a native English speaker. But the downside is that a less-than-skilled reader will have difficulties with the paragraph that might not demonstrate their true phonetic abilities."

People often use sounds from their first language until they can reproduce the ones used in the language they are learning.

Professor Weinberger says the site gets a million visits a month.

STEVEN WEINBERGER: "We get notices from speech pathologists, from computational engineers who do speech processing, from PhD students who want to do research on bias and accent judgments, from actors who need to learn a special part."

The archive contains more than one thousand five hundred recordings. These can be searched many ways, including by place of birth and the age at which the speaker began to learn English.

Professor Weinberger would like more people to send in their own samples of the sixty-nine-word paragraph.

STEVEN WEINBERGER: "Right now we only have samples from about three hundred fifty languages, including English. You know, there are six thousand languages in the world today, so we need lots more. That's why the archive work will never be finished."

And that's the VOA Special English Education Report. You can find a link to the Speech Accent Archive at 51voa.com. I'm Christopher Cruise.