Update Required To play the media you will need to either update your browser to a recent version or update your Flash plugin.
By VOA
2011-11-29 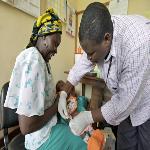 Photo: Reuters
A baby receives an injection of an experimental malaria vaccine in the Kenya coastal town of Kilifi

Malaria is caused by a parasite spread through the bite of infected mosquitoes. The World Health Organization, in its latest estimate, says the disease caused seven hundred eighty-one thousand deaths in two thousand nine. Most of those deaths were in children in Africa. Worldwide there were two hundred twenty-five million cases of malaria.

Both of these numbers represent improvements. In two thousand there were an estimated two hundred thirty-three million cases of malaria and almost a million deaths.

Malaria remains a major problem in Africa, but there have been some successes. Deaths in Rwanda, for example, have been reduced by sixty percent.

There are still no vaccines to prevent malaria. The main way for communities to control the disease is by controlling mosquitoes.

In a recent study, researchers in West Africa have shown that spraying insecticide indoors can greatly reduce malaria transmission.

The fight against malaria has two main targets: the parasite itself and the mosquito that carries the parasite. Insecticides target the mosquito. But over time the insects develop resistance to the chemicals. This has been happening with current mosquito killers, including chemicals known as pyrethroids.

Gil Germain Padonou and other researchers at the Center de Recherche Entomologique de Cotonou in Benin tested another insecticide. This one is called bendiocarb. They tested it with indoor spraying at sites throughout Benin.

There were fewer mosquito bites in homes sprayed with bendiocarb. More importantly, none of the three hundred fifty-thousand people who lived there got malaria-infected mosquito bites during the test.

Peter Hotez heads the American Society of Tropical Medicine and Hygiene, which published the research.

PETER HOTEZ: "And this is what this bendiocarb is all about, showing that it's efficacious -- at least in this setting in Benin, in a real, live field setting. So it provides a potentially good alternative where there's been high development of resistance to pyrethroids."

Dr. Hotez says the effectiveness in the test does not mean all malaria programs should use bendiocarb, or that indoor spraying should be the only method used.

PETER HOTEZ: "When we think about a large-scale goal to take on malaria, it's not an either/or situation. We're going to have to throw multiple things out there in order to see what the optimal combination is to achieve control."

Bendiocarb is widely used against a number of different insects. The insecticide is considered relatively safe when used as directed. It has not been shown to cause cancer, and it passes quickly out of the bodies of humans and other mammals.

The study from Benin appears in the American Journal of Tropical Medicine and Hygiene.