Update Required To play the media you will need to either update your browser to a recent version or update your Flash plugin.
By Mario Ritter
2011-2-24 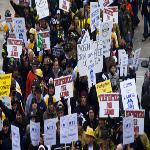 Photo: REUTERS
Firefighters show support for fellow union workers as they march at the Wisconsin state Capitol building on February 21, 2011 against a proposed bill by Republican Governor Scott Walker

Americans have been watching the protests in the Middle East and North Africa -- and closer to home. Workers in Wisconsin, and now some other states, have been protesting efforts to limit the negotiating power of government employees.

Wisconsin's newly elected governor, Scott Walker, says limits are needed on labor unions to help cut a deficit in the state budget. The Republican governor proposes to end collective bargaining rights for most public employees except on the issue of wages.

The bill has led to big, noisy demonstrations that began earlier this month in Madison, the state capital.

The bill would not affect police or firefighters. They are barred from striking. But firefighter Mahlon Mitchell came to protest anyway.

MAHLON MITCHELL: "This is ground zero for the nation."

Democrats in the state Senate fled to the neighboring Midwestern state of Illinois. They want to prevent the Republican majority in the Wisconsin Legislature from passing the bill which they consider anti-union. Labor unions are a traditional base of support for the Democratic Party.

Governor Walker says the state could have to start dismissing workers unless the Democrats return to debate what he calls a budget repair bill.

Dennis Dresang is professor emeritus of political science at the University of Wisconsin. He says the modern history of the state helps explain the strong reaction.

DENNIS DRESANG: "Wisconsin was the first in the nation to establish the right of public employees to bargain collectively, and it's a real shock to a lot of people that these rights would be taken away."

Collective bargaining rights differ from state to state. Lawmakers in Indiana, Michigan and Ohio have also proposed limits on unions representing public employees. Critics say politicians are using state budget problems as an excuse for union-busting -- an effort to take away rights to organize.

Unions have been shrinking in private industry. The Labor Department says only seven percent of workers in the private sector now belong to one. But more than one-third of government workers hold union cards. Local governments are the most unionized. Over forty-two percent of workers like teachers, health care workers and public safety employees are union members.

But labor protests are not the only political dispute capturing attention right now. A budget battle in Washington could force the federal government to suspend many operations at midnight next Friday. The last government shutdown happened fifteen years ago. It lasted a record twenty-one days.

And that's the VOA Special English Economics Report, written by Mario Ritter. For more news,  go to 51voa.com,Where we also invite you to tell us your thoughts about organized labor.  I'm Steve Ember.