Steve Jobs Step Down with Apple on Top

Update Required To play the media you will need to either update your browser to a recent version or update your Flash plugin.
By VOA
2011-9-1 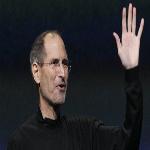 Photo: AP
Steve Jobs during one of his presentations to the media earlier this year. Tim Cook, who was the Apple's chief operating officer, has become the company's chief executive.

The chief executive who presented the latest, and coolest, electronics to the world has stepped down. Steve Jobs announced his resignation as head of Apple in a letter last week.

He wrote: "I have always said if there ever came a day when I could no longer meet my duties and expectations as Apple's CEO, I would be the first to let you know. Unfortunately, that day has come."

Steve Jobs and Steve Wozniak started Apple Computer in nineteen seventy-six. The company sold a new kind of electronic device: the personal computer. Apple Computer grew more quickly than anyone could have imagined.

In nineteen eighty-five, however, Steve Jobs resigned after disputes with managers who had been brought in to direct business operations. He soon started his own software company, NeXT, and bought a computer animation studio. The Pixar movie studio would go on to create movies like Toy Story and Finding Nemo. They are two of the most successful animated films ever made.

Apple struggled during the nineteen nineties. Many products failed. The company began losing money and its stock price sank. In nineteen ninety-seven, Apple bought NeXT and brought back Steve Jobs. Apple used software developed at NeXT to create the Mac OS computer operating system. The next year, Apple became profitable. And a series of highly successful products followed. In two thousand one, Apple released the iPod, a digital music player. The iPhone arrived in two thousand seven.

Apple has also been a leader in online marketing. The iTunes Music Store sells songs for download. The App Store sells applications for computers and mobile devices.

As Steve Jobs has noted, trial and error has always been part of the Apple model.

Steve Jobs is closely linked with the success of Apple. Investors were scared when he announced he had an operation for pancreatic cancer in two thousand four.

His decision to leave comes as Apple continues to release winning products. Apple sold over four and a half million iPads in the first three months of this year. The company holds the largest share of the growing tablet computer market.

On August ninth, Apple first passed Exxon Mobil Corporation to become the most valuable publicly traded company in the world. Since then the two companies have traded the lead.