Update Required To play the media you will need to either update your browser to a recent version or update your Flash plugin.
By Caty Weaver
2010-6-8 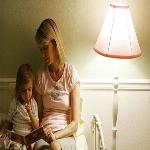 Photo: ASSOCIATED PRESS
Allysa Adams of reads to her daughter Andie before bedtime in this 2007 file photo

Parents know a nightly bedtime is not always easy to enforce. But researchers say bedtime rules may improve a child’s development.

A new study found better results in four-year-olds who go to bed around the same time every night and sleep at least eleven hours. Getting less than that was linked to lower abilities in language, reading and early math skills.

Researchers at SRI International in California did the study. It involved about eight thousand preschool children whose parents took part in government research on early childhood.

The parents answered questions by telephone at nine months and again at four years. The amount of sleep was based on their reporting of a child’s usual bedtime and wake time. These were not independently confirmed.

SRI policy researcher Erika Gaylor says doctors can easily try to get parents to set regular bedtimes. And at bedtime she urges parents to follow routines like reading books or telling stories to their children.

For most measures of development, the study found that an earlier bedtime was also a predictor of higher scores.

Last August, a study in the journal Sleep Medicine said children who go to bed after nine o’clock took longer to fall asleep and slept less. The study found that children also got less sleep if they did not have bedtime routines.

The new findings were presented this week in San Antonio, Texas, at a meeting of the Associated Professional Sleep Societies.

A separate study found that more sleep may even make a person run faster. The study was small -- seven players on the Stanford University football team. For the study, they aimed for at least ten hours of sleep each night during the season.

After seven to eight weeks of more sleep, the players ran faster in short training races. They also felt less sleepy during the day.

Stanford sleep researcher Cheri Mah says sleep should be part of an athlete’s training program. This is some of her advice: Before competition, extend your nightly sleep for several weeks to reduce a sleep debt. Adults should try to get seven to eight hours of sleep a night. Teenagers and young adults should aim for nine hours or more. Go to bed and wake up at the same times every day. And take brief naps during the day to get extra sleep.

And that’s the VOA Special English Health Report, written by Caty Weaver. You can read and listen to our stories at 51voa.com. You can also join us on Facebook, Twitter and YouTube at VOA Learning English. I’m Doug Johnson.