Study Ties Some Pesticides to Risk of ADHD in Children

Update Required To play the media you will need to either update your browser to a recent version or update your Flash plugin.
By Caty Weaver with Jessica Berman
2010-5-25 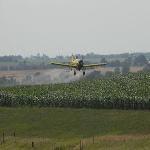 A.D.H.D. is attention deficit hyperactivity disorder. Government estimates say three to seven percent of school-age children in the United States have it. Adults can also have it. People with A.D.H.D. have problems with paying attention, controlling their behavior and being overly active.

Now, a study has linked an increased risk of A.D.H.D. in children to exposure to some kinds of pesticides. The chemicals are known as organophosphate pesticides. They kill insects by attacking their nervous systems. Earlier studies have shown that some of the compounds cause hyperactivity and thinking deficits in laboratory animals.

Researchers at the University of Montreal in Canada and Harvard University in Massachusetts did the study. It involved more than one thousand one hundred children between the ages of eight and fifteen. One hundred nineteen of them were identified as having A.D.H.D.

The researchers tested all the children for products that break down from organophosphates. Maryse Bouchard of the University of Montreal and Harvard lead the research team. She says, "The higher the level of pesticide residue in the urine, the higher the risk of A.D.H.D. in the children."

The scientists reported that the risk of the disorder was almost double in children with high levels compared to those with no measurable level. They say exposure at levels common among children in the United States may increase the chances that a child will be diagnosed with A.D.H.D.

Maryse Bouchard says the study found that exposure could play a part in behaviors such as inattention and hyperactivity. But she also says the study does not prove that the chemicals cause the disorder.

MARYSE BOUCHARD: "We can't affirm that exposure to pesticides is causing A.D.H.D. We would need a different type of study to say that."

The researchers say forty organophosphate pesticides are registered with the United States government. The chemicals are used to protect fruits and vegetables. They are also used to poison insects in other places such as homes.

Lynn Goldman is an environmental health scientist at Johns Hopkins University School of Public Health in Maryland. She notes that the use of pesticides, including organophosphates, is widespread in developing countries. Children come in contact with high levels of pesticides through farming.

LYNN GOLDMAN: "And those kids have much more serious, much more severe neurological problems. So we do see evidence of effects in those populations globally."

The study was published in the journal Pediatrics.