Update Required To play the media you will need to either update your browser to a recent version or update your Flash plugin.
By VOA
2011-8-5 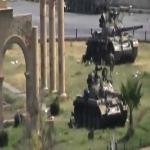 Photo: AP
In this image made from amateur video released by the so-called Shams News Network, a loosely organized anti-Assad group and accessed via The Associated Press Television News on Aug. 1, 2011, military armored vehicles are seen in the central city of Hama, Syria.

Tens of thousands of Syrians demonstrated against the government on the first Friday of the Muslim holy month of Ramadan. Late in the day, witnesses and activists said at least fifteen people were killed when government forces fired on demonstrators. They said most of the deaths happened around Damascus. Protests also took place in other Syrian cities.

The city of Hama has been under military attack since Sunday. A political activist in Hama told VOA that government forces have been raiding the homes of activists and carrying out arrests and killings. Still, he said, there were protests in Hama on Friday.

The Syrian government launched a violent campaign against pro-democracy protesters in March. American officials estimate that more than two thousand people have been killed in the attacks on protesters. On Thursday, Secretary of State Hillary Clinton called on other countries to join the United States in taking action.

HILLARY CLINTON: "But not just US sanctions because, frankly, we do not have lot of business with Syria. We need to get Europeans and others. We need to get the Arab states. We need to get a much louder, more effective chorus of voices that are putting pressure on the Assad regime, and we're working to obtain that."

Secretary Clinton said a statement Wednesday by the United Nations Security Council was a first step. The statement condemned the "widespread violations of human rights and the use of force against civilians by the Syrian authorities." It urged restraint on both sides in Syria.

The government has blamed much of the violence on what it calls terrorists and militants. The official news agency SANA reported Friday that unidentified gunmen had killed two security officers.

The United States and European countries had pressed the Security Council for a resolution. A resolution is stronger than the presidential statement it approved. But Russia, China, India, Brazil and South Africa blocked those efforts. They feared that a resolution could lead to a situation similar to the international military action in Libya.

The United States dismissed a promise this week by the Syrian president to permit reforms. These include letting opposition parties operate for the first time.

Syria has long had a single-party system led by the Ba'ath party of the Assad family. 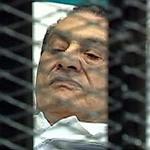 Former Egyptian President Hosni Mubarak is seen through wire mesh in the courtroom for his trial at the Police Academy in Cairo, August third.

In Egypt, Hosni Mubarak appeared in a hospital bed in a cage in a courtroom on Wednesday. The former president denied the charges against him. These include ordering the killing of protesters during the eighteen days of political unrest that forced him out. More than eight hundred people were killed.

Raina el Malky is a newspaper editor.  She says that if anyone had predicted this trial last year, she would have thought they were crazy.

RAINA El-MALKY: "I would have said they were are living in Mars or Neptune or somewhere outside Earth because this was unthinkable. I think what happened is a miracle and the way everything has happened since the first day, since January twenty-fifth, has been a miracle."

What became known as the Arab Spring uprisings in North Africa and the Middle East ousted the presidents of Egypt and Tunisia. Yemen's president was wounded by an explosion in June and remains in Saudi Arabia, recovering.