Update Required To play the media you will need to either update your browser to a recent version or update your Flash plugin.
By Shelley Gollust
2011-4-3

BARBARA KLEIN: Welcome to THIS IS AMERICA in VOA Special English. I'm Barbara Klein. Baseball is a sport that began in the eastern United States in the eighteen hundreds. It became known as the "national pastime," a game that millions of people continue to enjoy each spring and summer.

Major league baseball has just opened its new season. So this is a good time to explore the influence of baseball on popular culture, including music and poetry. Many songs and poems have been written about baseball, as we hear now from Ray Freeman and Shirley Griffith. 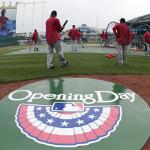 RAY FREEMAN: Baseball expert Warner Fusselle writes that there are probably more than one-thousand songs about baseball. The most popular is "Take Me Out to the Ball Game." It was written in nineteen eight by Jack Norworth. He wrote it after seeing a sign about baseball in an underground train in New York City.

His friend, Albert Von Tilzer, put the words to music. Mister Norworth reportedly had never seen a major league baseball game. He did not see one until thirty-three years after he wrote the song.

SHIRLEY GRIFFITH: People still sing "Take Me Out to the Ball Game" during baseball games. Near the end of the game, people become tired of sitting on the hard seats. So, during a special time in the game, everyone stands up and stretches their arms and legs. This tradition is called "the seventh inning stretch." Everyone sings a song together. Most often, it is "Take Me Out to the Ball Game." Here, it is sung by the National Pastime Orchestra and singers. 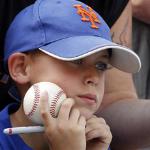 New York Mets fan Stephen LaGrua, 8, waits to get an autograph signed before an opening day baseball game between the Florida Marlins and the Mets in Miami, Friday, April 1, 2011

RAY FREEMAN: Baseball expert Richard Miller writes that many songs about other subjects -- such as love -- use words and expressions from baseball. For example, in a song written in nineteen twelve, a woman tells her boy friend that she will not like him unless he is a good baseball player. The song is called "If You Can't Make a Hit in a Ball Game, You Can't Make a Hit with Me."

SHIRLEY GRIFFITH: In nineteen forty-three, George Moriarty wrote a song designed to support American forces fighting in World War Two. Mister Moriarty was a former baseball player and manager for the Detroit Tigers team. His song is called "You're Gonna Win That Ball Game, Uncle Sam." It is performed here by the National Pastime Orchestra and singers.

Some people think Joe DiMaggio was the greatest player in the history of baseball. He hit safely in a record fifty-six games in a row for the New York Yankees in nineteen forty-one. This record never has been broken. That same year, Les Brown and his band recorded the song "Joltin' Joe DiMaggio."

Betty Bonney sings about the way DiMaggio hit the ball very, very hard -- how he jolted it.

SHIRLEY GRIFFITH: In nineteen fifty-five, a popular musical play about baseball opened on Broadway in New York. It was called "Damn Yankees." It was about a middle-aged man who gets a chance to play baseball for his team, the Washington Senators. He plays against the best team in baseball, the New York Yankees.

The Senators are not a very good team. Their manager wants them to play better. He urges them to play with all the feeling that is in their hearts. Here the cast of "Damn Yankees" sings "You Gotta Have Heart."

RAY FREEMAN: In addition to the many songs written about baseball, there is a famous poem about the game, too. It is called "Casey at the Bat." A young man named Ernest Thayer wrote the poem in eighteen eighty-eight. It was published in the San Francisco Examiner newspaper. The poem still is popular today.

"Casey at the Bat" is about a baseball team from a town called Mudville. The team is losing an important game. The game is almost over. Mudville is depending on its best player, Casey, to win the game.

The outlook wasn't brilliant for the Mudville nine that day;

The score stood four to two with but one inning more to play.

And then when Cooney died at first, and Barrows did the same,

A sickly silence fell upon the patrons of the game.

A straggling few got up to go in deep despair. The rest

Clung to that hope which springs eternal in the human breast;

We'd put up even money now with Casey at the bat.

RAY FREEMAN: To the surprise of the crowd, two players hit the ball well. They reach second and third base. They are ready to score. Then it is Casey's turn at bat. He can win the game if he hits the ball hard enough so that he and the other players can cross home plate. That will give their team more points than their opponent.

There was an ease in Casey's manner as he stepped into his place;

There was pride in Casey's bearing and a smile on Casey's face.

And when, responding to the cheers, he lightly doffed his hat,

No stranger in the crowd could doubt ‘twas Casey at the bat.

Ten thousand eyes were on him as he rubbed his hands with dirt;

Five thousand tongues applauded when he wiped them on his shirt.

Then while the writhing pitcher ground the ball into his hip,

RAY FREEMAN: The opposing pitcher throws the ball. But Casey does not try to hit it. The pitcher throws the ball again. Again, Casey does not try to hit it. There are now two strikes against him. One more strike and he will be out. The game will be over. Will Casey finally hit the ball? Will he win the game? The crowd is sure he will.

The sneer is gone from Casey's lip, his teeth are clinched in hate;

He pounds with cruel violence his bat upon the plate.

And now the pitcher holds the ball, and now he lets it go,

And now the air is shattered by the force of Casey's blow.

Oh, somewhere in this favored land the sun is shining bright;

The band is playing somewhere, and somewhere hearts are light,

But there is no joy in Mudville – mighty Casey has struck out.

BARBARA KLEIN: Our program was written by Shelley Gollust. The narrators were Shirley Griffith and Ray Freeman. I'm Barbara Klein. You can read, listen and learn English with our programs at 51voa.com from your computer or mobile device. You can also join us on Facebook and Twitter at VOA Learning English. And join us again next week for THIS IS AMERICA in VOA Special English.