Update Required To play the media you will need to either update your browser to a recent version or update your Flash plugin.
By Caty Weaver
2012-2-2 Photo: AP
Monument Circle in Indianapolis, Indiana. The Super Bowl will be played Sunday at the indoor Lucas Oil Stadium.

I'm Faith Lapidus. Today, we report all about the Super Bowl, the national championship for American professional football.

FAITH LAPIDUS: Sunday is a big day for sports lovers in America. That is when the National Football League holds its forty-sixth Super Bowl game. This year, the New England Patriots and the New York Giants will battle for the championship at the Lucas Oil Stadium in Indianapolis, Indiana. Christopher Cruise has more on the teams, the tensions and the halftime show at Super Bowl forty-six.

CHRISTOPHER CRUISE: The New England Patriots won thirteen of their sixteen games in the regular season. This Sunday marks their seventh Super Bowl. Only two other teams have taken part in more. The Pittsburgh Steelers and the Dallas Cowboys have gone to the Super Bowl eight times each.

The Patriots have won three Super Bowls and lost three. But, a win in this championship game could be especially sweet. The Patriots lost in their most recent Super Bowl appearance to the very team they will meet Sunday, the New York Giants. 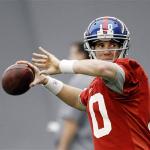 Giants quarterback Eli Manning
For the Giants, this will be Super Bowl number five. Their record is three wins and one loss. But the Giants are one of the most winning teams in the history of the NFL. They have been around a lot longer than either the Super Bowl or the Patriots.

The current New York Giants team is led by quarterback Eli Manning. He comes from a football family. His older brother Peyton Manning is a Super Bowl winning quarterback for the Indianapolis Colts. His father, Archie Manning, also played in the NFL.

Eli Manning won his first Super Bowl in the two thousand eight. He was named most valuable player of that game.

Quarterback Tom Brady leads the Patriots. He has had an extremely successful career in the NFL. In his ten years as New England's top quarterback, he has taken the team to the Super Bowl five times. He is one of two quarterbacks in history to win the Super Bowl and the NFL most valuable player awards more than once. He also holds many NFL records, including most touchdown passes in a season. 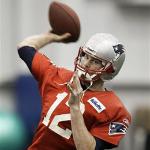 Patriots quarterback Tom Brady
Manning and Brady faced each other at the Super Bowl in two thousand eight. The Giants victory came as a huge surprise. The team had entered the NFL playoffs as a wild card. In other words, New York did not win its division championship. But, it did well enough during the season that the team was chosen to compete in the playoffs.

Four years ago, the Patriots had not lost a game during the season. They were expected to defeat the Giants by more than twelve points. But, in the end, the Giants beat the Patriots by three points, seventeen to fourteen. New York became the first wild card team in its football conference to win a Super Bowl.

The Giants did win their division this time. They finished the regular season with nine wins. One of those wins was against -- you guessed it -- the New England Patriots.

Commercials: $3 Million and Up

FAITH LAPIDUS: The Super Bowl is the most watched television program of any in the history of TV. Last year, more than one hundred million people watched the game. This represents big business for advertisers. Shirley Griffith tells us about some of the commercials and halftime entertainment for Sunday's game.

SHIRLEY GRIFFITH: Super Bowl ads are famously funny, inventive and artistic. And they cost a lot. Thirty seconds of television advertising during the game costs more than three million dollars. Super Bowl forty-six broadcaster NBC expects to receive up to three hundred million dollars from advertisers. Several of the ads have already been released on the Internet.

Car commercials take a major share of the advertising action. In one, an overweight dog spends months exercising so he can chase a new Volkswagen successfully. Another commercial shows an Eskimo leaving his home on a sled pulled by dogs. He returns with a new automobile, a Suzuki, with his dogs enjoying the ride.

Some of the advertising this year is filled with sexy images. Actor John Stamos and a beautiful woman fight over yogurt in one ad. In another, race car driver Danika Patrick and fitness trainer Jillian Michaels team up to paint the body of a supermodel. And you can see soccer star David Beckham -- a lot of him -- in an underwear ad for a clothing store.

Madonna at a Super Bowl press conference
But what will Madonna wear, is the question on many people's minds. The singer will perform during the game's halftime show. Madonna has said she is nervous about the performance. She told talk show host Anderson Cooper that the Super Bowl is the "holy of the holies." She said "I have to put on the greatest show on earth in the middle of the greatest show on earth."

Anderson asked her for details on what she would be doing. "I'll be singing," she said.

Madonna will share the halftime show with Nicki Minaj and M.I.A. The two pop stars performed on Madonna's album "M.D.N.A," which is expected to be released next month.

Madonna praised Minaj and M.I.A. for their independence and spirit. This week, M.I.A. released a new single called "Bad Girls."

Madonna has not said which songs she will perform at the Super Bowl halftime show. But many reports say one of her most famous songs, "Vogue," will be among them.

FAITH LAPIDUS: This week we launched a new relationship advice blog for English learners. So who gives the advice? You do. Our blog combines writing practice with crowd sourcing -- having a large group of people work on a solution together.

Our new blog is a way for people to improve their English and help others solve a relationship problem. It could be a personal or professional relationship. In some cases we also plan to get advice from experts about how they would deal with the situation.

The blog is divided into sections about dating, marriage, family, friends, work and school.

In the dating section, for example, an eighteen-year-old woman in Russia has been getting a lot of advice. She wrote that she is "disappointed in love and guys" after a bad experience.

In the family section, a medical chemistry student in South Korea is having a problem with his mother back home in China. The son is twenty-five and in a graduate study program. His mother is threatening to stop supporting him if his girlfriend from back home joins him at his university. Some of you have been advising him to respect his mother's wishes. Others are suggesting ways to get her to change her mind. Still others think he should lie to his mother -- or marry his girlfriend. You can read his problem for yourself and offer your own advice.

In the family section, an eighteen-year-old woman from Kyrgyzstan would like some ideas about how to improve her relationship with her younger sister. And in the work section, one of the problems is from a forty-year-old man in Iran. He wants to know how to build effective relationships at work so he can get a promotion.

Every few weeks we plan to read some of the blog postings here on our program. So we need you to keep sending us your problems. Think of this as a way to ask others for advice without everyone you know having to see it on your Facebook page.

Send your problem to mosaic@voanews.com and type "Relationship" in the subject line. We will not use your name on the air or on our blog, but please tell us your age, gender and country.

To read the blog and offer advice, go to 51voa.com and click on the link that says "Relationship Advice: What Would You Do?"

FAITH LAPIDUS: I'm  Faith Lapidus. This program was written and produced by Caty Weaver. Join us again next week for music and more on AMERICAN MOSAIC in VOA Special English.