Update Required To play the media you will need to either update your browser to a recent version or update your Flash plugin.
By VOA
2011-9-8 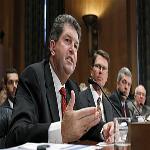 Photo: AP
Postmaster General Patrick Donahoe, left, speaks to the Senate Homeland Security and Governmental Affairs Committee in Washington, Tuesday. Next to him is John Berry, director of the Office of Personnel Management.

The United States Postal Service has a history as long as the nation's. The Second Continental Congress appointed Benjamin Franklin as the first Postmaster General in seventeen seventy-five.

This week, current Postmaster General Patrick Donahoe brought an urgent message to a Senate committee. He told the Committee on Homeland Security and Governmental Affairs that the Post Office could need more money by the end of the month.

PATRICK DONAHOE: " Without the enactment of comprehensive legislation by September 30, the Postal Service will default on a mandated 5.5 billion dollar payment to the Treasury to pre-fund retirement retiree health benefits. Our situation is urgent."

The Postal Service had losses of almost six billion dollars for the nine-month period ending in June. That could grow to ten billion for the year. Part of the deficit is a five and a half billion dollar payment to the federal retirement plan for postal workers.

Mister Donahoe is asking Congress to approve huge changes to the Postal Service. He wants to cut over one hundred thousand workers, close thousands of post offices and end Saturday mail delivery. He says the service needs to operate more like a business.

PATRICK DONAHOE: "As a self-financing entity that depends on the sale of postage for its revenues, the Postal Service requires the ability to operate more as a business does."

The Postal Service is responsible for its own financing and not part of the federal budget. But it does take part in federal retirement and health plans. It says it has paid too much to federal retirement plans and wants at least seven billion dollars returned.

Mister Donahoe also wants to pull the Postal Service out of the federal benefit plans. He says the service's proposals could cut twenty billion dollars by twenty fifteen and return it to profitability.

John Berry is director of the federal Office of Personnel Management which supervises federal retirement and health plans. He said the Obama administration would soon announce its own plan.

At the hearing, Senator Susan Collins criticized the administration for not having a plan already. Leaders of two labor unions representing postal workers have also criticized the proposed cuts.

The United States Postal Service has over five hundred sixty thousand employees. It reported revenue of sixty-seven billion dollars last year -- more than either of its biggest private competitors, FedEx or UPS. But as the amount of physical mail decreases, so too have the earnings from Postal Service operations.

JOSEPH LIEBERMAN: "The US Postal Service is not an 18th Century relic. It is a great 21st Century national asset. But times are changing rapidly now, and so too must the Postal Service if it is to survive."