These Jazz Students Play for Justice

Update Required To play the media you will need to either update your browser to a recent version or update your Flash plugin.
By VOA
2010-12-8 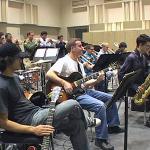 Yet when the program first started, the student musicians played to an almost empty theater. Ed Weiner was one of the few people in the audience when the school held the first jazz concert ten years ago.

ED WEINER: "The quality of the performance was outstanding, but I was shocked to see the poor attendance."

So he did something about it. He found a way not only to increase attendance, but also to raise money for the community.

Ed Weiner is a lawyer. He organized the concerts into a program called Jazz 4 Justice. The performers include students and employees from the university, along with guest musicians.

The concert raises money for the Fairfax Law Foundation. The local group uses some of that money to provide free legal services to people in the community.

The foundation also supports programs to help young people learn about the legal system. These include courthouse tours and education about the legal and health effects of drug and alcohol abuse.

Foundation officials say the yearly concert brings in about fifteen thousand dollars. Five thousand of that goes to George Mason University for scholarships for students in the jazz studies program.

Jim Carroll directs that program. He says Jazz 4 Justice grew slowly, each year becoming larger and larger. And he says all the credit really goes to Ed Weiner.

JIM CARROLL: "He has done so much to help this program. He is the guy who is out there on the streets selling tickets, building our audience, so on and so forth."

Mr. Weiner says the idea is to provide a meaningful experience for the young musicians.

ED WEINER: "We want to keep the focus on the students. This is part of their education and they really see that their talents can be turned into very good projects and doing good for the entire community."

AMY LOUDIN: "It's all for a good cause, so I feel glad to be a part of that."

Ed Weiner says he hopes Jazz 4 Justice can be copied in other communities in Virginia and across the country.

And that's the VOA Special English Education Report. Join us online at 51voa.com and on Facebook, Twitter and YouTube at VOA Learning English. I'm Doug Johnson.