Update Required To play the media you will need to either update your browser to a recent version or update your Flash plugin.
By Avi Arditti
2010-2-7

Welcome to THIS IS AMERICA. I'm Steve Ember. 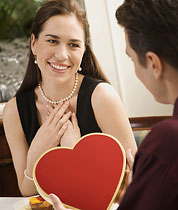 And I'm Faith Lapidus. These are important days for makers of sweets and sellers of flowers. For owners of fine restaurants and publishers of greeting cards. For salespeople at clothing stores. And for all the people whose job is to make other people's hair and fingernails look their best.

These are important days because soon it will be February fourteenth, Valentine's Day. This week on our program, we ask three generations of people what the holiday for love and romance means to them.

We begin with the youngest generation. Sixteen-year-old Jarrah was with a group of Chinese students visiting the United States. What does Valentine's Day mean to her?

JARRAH: "I know that's a Western festival for lovers who date or they love each other. We are not allowed to date in high school."

She explains that some people in China may celebrate Valentine's Day, but China also has its own version. It is based on the story of a fairy from heaven who comes to Earth and marries a cowhand on a farm. In the end, they are permitted to meet just once a year, on the seventh day of the seventh lunar month.

JARRAH: "There's a girl named Zhi Nu and a boy named Niu Lang. Now they are stars in the sky, so they meet each other in lunar months, seventh in July, each year once. We celebrate that day like the Valentine's Day in Western culture."

So how did February fourteenth come to be celebrated as it is? Explanations date back to ancient Rome. But nothing is sure, not even the identity of the Roman Catholic saint celebrated by this day. As a result, in nineteen sixty-nine, the church removed Saint Valentine's Day from its official worldwide calendar of Catholic feasts.

But the popular meaning of Valentine's Day continues to capture hearts around the world, even if not always on February fourteenth. Camile and Nietzsche were among a group of Brazilian Youth Ambassadors visiting the United States.

CAMILE: "We have Valentine's Day but in a different day. It's June twelfth."

NIETZSCHE: "So in Brazil, I would translate as 'the Day of the Couple. And it's like you don't give friends or family gifts, you give your boyfriend or your girlfriend. And the guys, they are sometimes pretty boring because they like to give chocolate and flowers. And girls are tired and sick of that."

NIETZSCHE: "So I believe I'd better give a hot Brazilian kiss. It would be better on the Day of the Couple."

Next, we talk to some college students. Jack Feldman is from Iowa in the American Midwest. What is his best Valentine's Day memory?

JACK FELDMAN: "Any and all Valentine's when I actually had a girlfriend."

And the worst memory?

JACK FELDMAN: "All the other ones."

He remembers as a child choosing valentine cards to give to his classmates, a tradition for American schoolchildren.

Andrew Shim is twenty-two years old, from Maryland. We asked him what American teenagers like to do for Valentine's Day. He listed the usual -- chocolate, a movie, maybe go to a party. But then we asked him if he had ever done anything special.

ANDREW SHIM: "Oh yeah, I actually made my own chocolate at home. But I kind of messed it up. It was OK, I give to that person I like. It didn't turn out well, but you know, I mean it was a nice memory though, a good experience making chocolate."

Andrew Shim and Jack Feldman are doing college internship programs in Washington. So are these three international students we are about to meet, starting with Jeong Kim from Seoul.

JEONG KIM: "Normally in Korea, well the girls take the opportunity to give out chocolates to guys that they have a crush on."

KATTIA: "In Mexico we're used to like for, for more for couples, not like so for friends and stuff. It's a cool day because everybody gets to give balloons and chocolates and all that stuff to the person you're in a relationship in or whatever."

SONIA ZIADE: "In Canada it's pretty much the same as the U.S. It's very consumer based, where we buy chocolate. We go to the restaurant, have a romantic dinner. Every day should be Valentine's Day, right?"

Those last two voices were Kattia from Mexico and Sonia Ziade from Montreal, Canada.

Now we talk to a group of parents. They all live in the Washington area and are involved together in the Boy Scouts of America.

Ming Hong Ward came to the United States from China in nineteen eighty-nine. What does Valentine's Day mean to her?

MING HONG WARD: "I was in college when I came to United States and it was interesting that in America they celebrate people in love and express love to each other, because in China people are very reserved and they do not show appreciation openly.

Andrea Liddell says she and her husband exchange cards for Valentine's Day.

ANDREA LIDDELL: "I look forward to getting flowers and, if I'm really lucky, a date. We get to go out together."

And what is her best Valentine's Day memory?

ANDREA LIDDELL: "I knew you'd ask that. Valentine's Day ... when I've been surprised. When we had like a surprise -- we got to go out to someplace very fancy, didn't really know what was going to happen ahead of time. That was a really lovely one. It involved a lot of food at that time."

And her worst memory?

ANDREA LIDDELL: "Let me get back to you on that. Oh, oh, oh -- in college, the boyfriend who absolutely forgot Valentine's Day. That hurt my feelings. So there you go, that was the worst one."

Lauri and Bob Dacey have been married for twenty years. Any special memories of Valentine's Day?

LAURI DACEY: "I don't remember any one in particular. I mean, they're pretty much the same, like we'll just celebrate, exchange cards, may go out to dinner. So once we had the children, Valentine's Day, I think, became more about them. We were starting to give them gifts and treats and really not going out in the evening anymore for that day."

REPORTER: "And Bob, I mean what's a typical gift, Valentine's Day gift that you buy?"

BOB DACEY: "Candy and sweets all the time. And we always have those little hearts. That's what my fondest memory is, too, of the little Valentine's hearts that come out once a year, little candies with little nice kind of love sayings on them."

And what does Valentine's Day mean to their children in school?

LAURI DACEY: "In school, I think it means exchanging cards and getting a candy, or multiple candies."

BOB DACEY: "And they exchange cards, they sometimes decorate nice little boxes so they can put valentines in each other's box in school."

Bob Steinrauf has been married for almost twenty-eight years. What does he think of Valentine's Day?

BOB STEINRAUF: "I think it's actually a good opportunity to remember those things that we want to do on Valentine's Day -- you know, special things for the spouse or whoever -- you probably ought to do them year-round. Because so often, especially with guys, you'll say, 'Hey, we had Valentine's Day. I got you roses, I got you chocolate, it says I love you. What more do we need?' But I think it really is a call to make sure you remember to do that during the day, during the week, during the months before and after Valentine's Day."

BOB STEINRAUF: "You would have to get the second opinion from my wife. Sometimes yes, but not as much as I ought to."

And sometimes, as the old saying goes, it is the thought that counts.

BOB STEINRAUF: "Early in our marriage my wife came -- she was going to school and working late and driving home, so I baked a cake. Now it was not just any old cake. It came in the round cake pans, and I baked it, but then I attempted to cut out a heart and used pink icing and decorated it. Now the sides of the cake fell apart tremendously. But that was probably the best thing I could have done. She looked at it. It was pathetic. But she goes 'Oh, I love you.' So that was a nice Valentine's Day."

Not everyone is a big fan of Valentine's Day. This is Joe Durso, twenty years old, from Louisville, Kentucky. What does it mean to him?

JOE DURSO: "Nothing, and I'm not even sure when it is. If I was in the chocolate business I think I would probably support it. Or in the flower business. But it isn't really something that matters to me."

This seemed to be a dissenting opinion, though, at least among the people we spoke to. Next we meet a group of friends from a social club in Northern Virginia, including Marge Lubeley. Reporter Nancy Steinbach asked her what she does on Valentine's Day.

MARGE LUBELEY: "I usually get together with a daughter and a granddaughter and we go out to dinner and exchange gifts. I'm a widow and so this is a fun time for me."

REPORTER: "How about before, when you were single and younger?"

MARGE LUBELEY: "It wasn't that important. But when I married, it was always a dozen red roses from my husband. So it was special."

Sally Margolis also lost her husband. But two of her four children live locally. So on Valentine's Day she might go out to dinner with one of them or babysit for her grandchildren.

Greg Ogden would agree with that.

GREG OGDEN: "I think probably some of the nicest ones, the more memorable ones are back when I was a teenager. And I enjoyed those. The family celebrated Valentine's Day in a little bit bigger way than we do now. So there was bigger meal. There was a girlfriend involved, sometimes invited over to our house as well for the meal, and part of the family, and cards back and forth. When you're teenagers, you don't quite know what to write on there. Little Os and Xs for kisses and things like that. You brought back a moment of nostalgia for me. I thank you for that."

We leave you with these words from another one of the friends, Nancy Lang.

NANCY LANG: "Valentine's Day is a wonderful opportunity for people to refocus on what love is all about. Because it's sharing, it's giving. Love is a strange element of our lives. But it's very important because without it you have nothing."

Our program was written by Avi Arditti and produced by Caty Weaver. I'm Faith Lapidus.

And I'm Steve Ember. What does Valentine's Day mean to you? Let us know. You can post comments, and read what other people around the world are saying, at 51voa.com. You can also find transcripts, MP3s and archives of our past programs. We would love to have you join us again next week for THIS IS AMERICA in VOA Special English.