Songs About Spring Can Be Happy or Sad

Update Required To play the media you will need to either update your browser to a recent version or update your Flash plugin.
By Shelley Gollust
2010-3-14 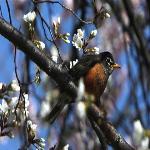 Photo: AP
The American robin is a traditional sign of spring

STEVE EMBER:  And I’m Steve Ember. This week on our program, we play some favorite songs about spring.

BARBARA KLEIN:  On earlier shows, we have brought you some of our favorite songs about summer, autumn and winter. Now it is spring in the northern part of the world so it is time to celebrate that season. Many people think of this classical music piece when they think "spring." It is Allegro from Concerto Number One "Spring" from the "Four Seasons." Italian composer Antonio Vivaldi wrote it in the seventeen hundreds.

STEVE EMBER:  Spring is a wonderful season to celebrate rebirth and new life. The long, cold winter is over. The weather is warmer and sunnier. The trees again have leaves and the flowers are blooming. The season represents hope, joy and beauty.

However, not all songs about spring are happy. This song by K.D. Lang is about dreaming of spring in cold dark places. She recorded "I Dream of Spring" in two thousand eight.

BARBARA KLEIN:  Unlike the other seasons, there are not many rock songs about spring. Most of the songs about this season were written in the nineteen thirties and forties by famous modern composers. The songs became "standards," popular songs recorded by many singers.

Here is one example, "It Might as Well Be Spring." Richard Rodgers and Oscar Hammerstein wrote the song for the movie "State Fair" in nineteen forty-five. Frank Sinatra sings about having "spring fever." This is not a real sickness. It is a feeling of restlessness or excitement brought on by the coming of spring.

BARBARA KLEIN:  Frank Loesser wrote this sad song, "Spring Will be a Little Late This Year." Why has the season been delayed? Because the singer’s lover has left her. Sarah Vaughn released her version of the song in nineteen fifty-three.

STEVE EMBER:  By now you may be thinking: "Enough with the sad songs, already!" OK, then how about a cowboy song? Gene Autry was one of America’s most famous singing cowboys. He recorded "When It’s Springtime in the Rockies" in nineteen thirty-seven.

BARBARA KLEIN:  In most of the United States, spring is a warm and pleasant season. But this is not the case in the northwestern state of Alaska. According to Johnny Cash, it can be extremely cold. He sings "When It’s Springtime in Alaska (It’s Forty Below)."

STEVE EMBER:  We leave you with a sunny song called "Up Jumped Spring." Freddie Hubbard wrote this jazz song and the Billy Taylor Trio performs it.

STEVE EMBER:  And I’m Steve Ember. Our programs are online with transcripts and MP3 files at voaspecialenglish.com. Join us again next week for THIS IS AMERICA in VOA Special English.