For Many, NCAA Means Championships

Update Required To play the media you will need to either update your browser to a recent version or update your Flash plugin.
By Mario Ritter
2010-3-28

Photo: AP
The Northern Iowa basketball team celebrates after their win over Kansas in an NCAA second-round college basketball game

Welcome to THIS IS AMERICA in VOA Special English. I'm Steve Ember.

And I'm Faith Lapidus. This week on our program, we tell about the largest college sports organization in the United States. The National Collegiate Athletic Association includes colleges and universities, athletic conferences and non-profit organizations. It has over one thousand members. The NCAA sets rules for student athletes and their schools.

It links academic studies, sports, rules and big business. But most Americans think about one thing when they hear NCAA: championships.

This month, many Americans are caught up in the yearly tradition of "March Madness." It describes the excitement over the Men's and Women's NCAA National Basketball Championships. The first games began March sixteenth. People join "office pools" in work places around the country — usually to bet on the men's championship.

Fans in office pools try to predict the winners of each of the sixty-three games and the college basketball champion. They fill out forms called brackets with their choices of which team they think will win. Usually, people bet five or ten dollars. Quang Lam, a Web producer from Virginia, says he is in three pools this year: two for money and one for fun. First prize in one pool is one thousand dollars. Fans used to fill in their brackets on paper. Today, office pools are mostly done on-line. People bet tens of millions of dollars on NCAA tournament games in Las Vegas, Nevada, where gambling is legal. But Americans bet much more in office pools nationwide.

There are always surprises during March Madness. This year's top men's team, the University of Kansas, lost in the second round to ninth seeded Northern Iowa University. But evenly matched teams often play to exciting finishes like Michigan State University's last second victory over the University of Maryland.

In some ways, the NCAA really is about championships. The first was held in nineteen twenty-one. Sixty-two teams competed in the National Collegiate Track and Field Championship held at the University of Chicago. Today, the NCAA holds eighty-eight championships in twenty-three sports every year. Since nineteen seventy-three, colleges and universities have competed in three divisions. The largest schools compete in Division One.

This year, the NCAA is marking its one hundred fourth year. But it is only the twenty-ninth year that women's championships have been part of NCAA sports.

Before the early nineteen seventies, women did compete in sports clubs at America's colleges and universities. But these activities were not organized as they are now. Women's competitions were organized through health associations or other groups. And they received little attention compared to men's sports.

But in nineteen seventy-two, Congress passed the federal law known as Title Nine. It bars discrimination based on sex at educational institutions that receive federal money. Title Nine changed college sports forever. Joni Comstock is a top official for championships with the NCAA.

JONI COMSTOCK: "Women's programs began to ramp up and get more support and resources and attention post nineteen seventy-two. And by nineteen eighty-one men's and women's programs were joined together under the umbrella of the NCAA."

STEVE EMBER: More than four hundred thousand students take part in sports organized by the NCAA. Women and men still do not take part in athletics in equal numbers. But Joni Comstock says NCAA women's participation has grown a lot.

JONI COMSTOCK: "In nineteen eighty-one, we had approximately sixty-four thousand women who are participating in NCAA intercollegiate athletics across this country. And today we have approximately a hundred and seventy-seven thousand female participants in our NCAA institutions."

College teams may have both men and women in three sports: skiing, rifle shooting and fencing. Only in rifle do women compete directly against men. This year's champion was Texas Christian University. In rifle, women competitors are so strong that TCU became the first all-female team to win the NCAA championship.

As senior vice-president for championships, Joni Comstock knows how hard it is to coordinate big sports events. She says the NCAA spends about seventy million dollars a year to organize championships. Fifty-seven thousand student-athletes take part. Joni Comstock says championships are held in rounds at different places around the country.

The NCAA has more than three hundred eighty professional employees working mainly at its headquarters in Indianapolis, Indiana. 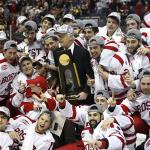 The Men's and Women's Final Four basketball championship receives a lot of attention at NCAA headquarters. But they are not even the last of the winter season championships. The division one hockey championship, called the Men's Frozen Four, finishes on April tenth.

Still, it is hard to overstate the importance of the men's and women's division one basketball championships to the NCAA. The University of Oregon won the first men's tournament in nineteen thirty-nine. That event was held at Northwestern University near Chicago. It lost money.

Today, money is not a problem. The NCAA has a contract with CBS Television to broadcast the men's tournament. It is worth about six hundred seventeen million dollars this year. A contract with ESPN is worth seventy-three million dollars over the next four years. It includes broadcasting rights for the women's championship games.

People have criticized the NCAA for placing too much importance on the business side of college sports. Education Secretary Arne Duncan recently urged banning teams with low graduation rates from play in the NCAA basketball tournament.Some men's basketball teams have graduation rates well below forty percent. But the NCAA says that graduation rates among all student athletes are higher than the general student population.

The roots of the NCAA date back to the need to control one sport—American football. In fact, a former NCAA worker Kay Hawes wrote that the NCAA's "father was football and its mother was higher education." In the early nineteen hundreds, football was wildly popular. The sport had fewer rules, was extremely violent and provided little protection for players. Serious injuries and deaths were common.

In nineteen-oh-five, President Theodore Roosevelt called together representatives from Harvard, Princeton and Yale universities. His idea was to change the rules of football to make it safer. The message was that the game must be reformed or it would be banned.

Sixty-four colleges and universities gathered to create a new rule-making group that year. It was called the Intercollegiate Athletic Association of the United States. In nineteen-oh-nine, it renamed itself the National Collegiate Athletic Association. But the NCAA does not hold a football championship for the biggest universities, although it does for division two and three schools. The Bowl Championship Series is managed by officials of major athletic conferences, bowl game representatives and a few schools. It is not linked to the NCAA and divides its own income of one hundred forty-eight million dollars separately.

In over a century, the NCAA has struggled with the same issues that it faces today. They are questions of sportsmanship, pay for players and influence from sports agents. Academic requirements and rules limiting the time students spend on sports are also subjects for reform and debate.

But the NCAA has built a tradition of sports competition. It has taught hundreds of thousands of talented young people about teamwork and leadership. Sports and teaching have a long history together.

Our program was written and produced by Mario Ritter. I'm Faith Lapidus.

And I'm Steve Ember. Join us again next week for THIS IS AMERICA in VOA Special English.