Finding Sweetness in a Cupcake

Update Required To play the media you will need to either update your browser to a recent version or update your Flash plugin.
By Nancy Steinbach
2010-4-11 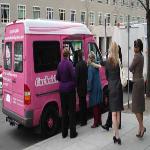 Photo: Nancy Steinbach
Customers line up at the Curbside Cupcakes truck in Washington

Welcome to THIS IS AMERICA in VOA Special English. I'm Faith Lapidus.

And I'm Steve Ember. To some people, they are nothing more than a harmless treat or a guilty pleasure to enjoy from time to time. To others, they are enemies of the public health in a time of what the World Health Organization calls a "global obesity epidemic." But one thing is sure: foods like doughnuts and cupcakes are a big business. This week on our program, we tell you about a few kinds of foods that some Americans find hard to resist.

Grocery stores in the United States sold almost half a billion dollars worth of freshly made doughnuts last year. And that is not all.

A doughnut is a round piece of fried dough with a hole in the middle or filled with cream or jelly. The traditional spelling is d-o-u-g-h-n-u-t but people often just spell it d-o-n-u-t.

A lot of places that sell coffee also sell doughnuts. But there are stores like Dunkin' Donuts and Krispy Kreme that make many different kinds of donuts. Some people call these "designer doughnuts."

That name could also describe a dessert served at Buddakan, a modern-Asian restaurant in Philadelphia, Pennsylvania. One of its most popular desserts is called Dip Sum Doughnuts. Buddakan pastry chef Kate Honeyman explains.

KATE HONEYMAN: "They are small, round doughnuts, they're served in a Chinese take-out box and they're coated in a cinnamon and five-spice sugar. And we serve them with a trio of dipping sauces --chocolate, ginger cream cheese and a blackberry jam."

BROOK LEVIN: "They arrived in a cardboard take-out box similar to when you get Chinese food to bring home."

This is Brook Levin, a retired teacher who ordered the dessert at Buddakan in Philadelphia.

BROOK LEVIN: "And the box was open and there were probably about five or six of these little round, yummy-smelling warm doughnuts in there. And next to them on the plate was, it was a sectioned plate, and there were three different dipping sauces that you could use to make them even better. Yummy, just delicious."

From doughnuts we move on to cupcakes. There are chocolate, vanilla and other kinds. Cupcakes are generally topped with frosting and served still inside the paper baking cup in which they were made.

Cupcakes have been around for a long time. Children love them. But in recent years a lot of adults have found reason to love them, too. 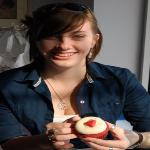 Amanda Bloss at the Cupcakes Actually bakery in Fairfax, Virginia

AMANDA BLOSS: "Cupcakes are cool because they're having your own personal cake instead of having to share with a lot of people. You get one especially for you."

Amanda Bloss is a college student from Fairfax, Virginia, near Washington. She is a fan of cupcakes. In fact, she has even been to the Magnolia Bakery in New York City which helped spread the current craze.

AMANDA BLOSS: "Magnolia is wonderful. The first time I went I got a red velvet and a dark chocolate with mocha frosting and split it with my best friend. And it was the most amazing cupcake I've ever had in my life! [Laughs]"

That was from "Saturday Night Live" -- just one of the TV shows and movies that have featured the Magnolia Bakery in New York. But we met Amanda at a bakery in Fairfax called Cupcakes Actually. The Washington Post recently rated the cupcakes from there as some of the best in the capital area. 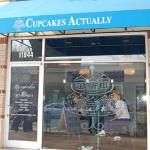 Jennifer Neiman (NY-man) and her sister Susan Woodhouse opened the bakery about a year ago, right in the middle of the Great Recession.

JENNIFER NEIMAN: "I mean I knew cupcakes were hot, but I didn't expect quite the sales for that first year. About a little over five hundred thousand in sales the first...

So why do they think cupcakes are so popular?

JENNIFER NEIMAN: "People can eat a cupcake and not feel like they're eating a whole piece of cake. It's just you know a guilty little pleasure, I think, for most, and it...

Cupcake stores have opened in cities around the country. Some are even on wheels.

Curbside Cupcakes operates out of a truck that travels around Washington. Two friends, Kristi Cunningham and Sam Whitfield, started the company in November of two thousand nine. She was a business consultant and he was working as a lawyer.

Kristi says Sam got the idea because he did not want to go to a store to get a cupcake. He wanted the store to come to him. So now, people can go to the Curbside Cupcakes Web site and find out where the truck will be at each hour of the day. The information is also available on Facebook and Twitter.

We caught up with the truck about a block from the VOA studios. One of the many customers in line was Sarah Sullivan from Arlington, Virginia.

SARAH SULLIVAN: "They're accessible, I mean they go all around D.C. and really good quality cupcakes. I consider myself a connoisseur of good cupcakes and I think they make a good solid cupcake. During tough times -- I mean we are in a recession right now -- this is like affordable luxury. You know, it's like three dollars for something that's, I don't know, in my mind pretty luxurious."

Another customer in line at the Curbside Cupcakes truck was this woman, Pat Roberts from Leesburg, Virginia.

PAT ROBERTS: "Well, they're easy to eat, they're like bite-size portions which is better than cake or ice cream, so you don't feel like you get as many calories if you eat just one. You have the option of just eating one."

Kristi Cunningham says she and Sam Whitfield hope to expand Curbside Cupcakes within Washington and to surrounding areas. Right now they have just the one truck and their business permit is good only in the city. So when Kristi uses the truck to see her mother outside Washington, people are disappointed that she cannot stop to sell them cupcakes.

One more thing. Kristi and Sam were friends when they became business partners. Now, since opening Curbside Cupcakes, they have decided to get married.

But we'll let Jennifer Neiman, co-owner of Cupcakes Actually in Fairfax, Virginia, have the last word about the appeal of cupcakes.

JENNIFER NEIMAN: "Oh my goodness, you should see how people look when they walk in and see cupcakes. It's like Santa Claus was sitting behind that counter. They just -- I don't care if it's a ninety year old man or a two year old child or a thirty year old, you know, woman or man. Everybody just goes goo-goo eyed over cupcakes."

(MUSIC: "Sweets for My Sweet" / The Drifters)

One sweet treat that is fairly new to the United States is the macaron. That's m-a-c-a-r-o-n. People who have never heard of a macaron usually confuse it with the much better known treat spelled with two Os, the macaroon.

Rande Janus sells locally made macarons at his store, the Wine Cabinet, in Reston, Virginia. He explains the difference between a macaron and a macaroon. 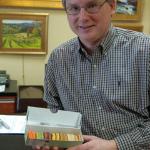 Rande Januss with a box of macarons at his Wine Cabinet store in Reston, Virginia

RANDE JANUS: "People are used to bakery style macaroons which is coconut based. This is a very very different product. This is in the French European tradition, is its very very small just about the size of a half dollar or so. And once people taste them, they come back for more. It's as simple as that."

The modern macaron is a sandwich cookie basically made of sugar, almonds and egg whites around a creamy filling. The outside layers are a bit crunchy, then the soft part takes over and the whole thing seems to just melt in your mouth.

Rande Janus says people come into his wine store looking for macarons after they taste them at a friend's house or a party or a wedding. So what does he think of their future with Americans?

RANDS JANUS: "I think it's going to be about the level that wine is. And basically ten percent of us buy ninety percent of the wine. So I don't see this as being on every table. But if people enjoy fine dining, if people enjoy entertaining, they're always looking for ways to enjoy their friends and family and impress them and have wonderful food, but not everyone has the time these days to prepare things themselves. So this type of product is just, they're a treat, they're something very, very special to be savored."

This program was written by Nancy Steinbach and produced by Caty Weaver. You can find transcripts, MP3 and archives of our programs, and sign up for podcasts, at 51voa.com. You can also post comments on any of our stories. And you can follow us on Twitter at VOA Learning English. I'm Faith Lapidus.

And I'm Steve Ember. We hope you join us again next week for THIS IS AMERICA in VOA Special English. Wow, I am really hungry after all this talk about doughnuts, cupcakes, macaroons and macarons. Do you think that cupcake truck is still in the area, Faith?