Update Required To play the media you will need to either update your browser to a recent version or update your Flash plugin.
By Brianna Blake
2011-4-18 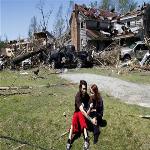 Photo: AP
Nathaniel Ramey comforts Megan Hurst at her grandmother's house in Askewville, North Carolina, after a tornado on Saturday

KATHERINE COLE: This is SCIENCE IN THE NEWS in VOA Special English. I'm Katherine Cole.

BOB DOUGHTY: And I'm Bob Doughty. This week, we will tell about the science of tornadoes. Tornadoes have been observed inwmany parts of the world. But the storms are most often found in the United States.

BOB DOUGHTY: Tornado season has begun in the United States. Violent storms struck several parts of the country last week. The National Weather Service said there were ten reports of tornadoes across the central and southern Plains states last Thursday.

A tornado is a violently turning tube of air suspended from a thick cloud. It extends from a thunderstorm in the sky down to the ground. The shape is like a funnel: wide at the top, narrower at the bottom.

Tornadoes form when winds blowing in different directions meet in the clouds and begin to turn in circles. Warm air rising from below causes the wind tube to reach toward the ground. Because of their circular movement, these windstorms are also known as twisters.

The most severe tornadoes can reach wind speeds of three hundred twenty kilometers an hour or more. In some cases, the resulting paths of damage can stretch more than a kilometer wide and eighty kilometers long.

KATHERINE COLE: With a tornado, bigger does not necessarily mean stronger. Large tornadoes can be weak. And some of the smallest tornadoes can be the most damaging. But no matter what the size, tornado winds are the strongest on Earth. Tornadoes have been known to carry trees, cars or homes from one place to another. They can also destroy anything in their path.

Tornadoes have been observed on every continent except Antarctica. But experts say they are most commonly seen in the United States. On average, eight hundred tornadoes are reported nationwide each year.

The National Oceanic and Atmospheric Administration keeps records of tornado sightings. It says tornadoes kill eighty people and injure one thousand five hundred others nationwide in an average year.

BOB DOUGHTY: Tornadoes are observed most often in the central part of the United States, where the land is mostly flat. The area where the most violent tornadoes usually happen is known as "Tornado Alley." This area is considered to extend from north central Texas to North Dakota.

Tornadoes can happen any time of the year. But most happen from late winter to the middle of summer. In some areas, there is a second high season in autumn.

KATHERINE COLE: Tornado seasons are the result of wind and weather patterns. During spring, warm air moves north and mixes with cold air remaining from winter. In autumn, the opposite happens. Cold weather moves south and combines with the last of the warm air from summer.

Tornadoes can strike with little or no warning. Most injuries happen when flying objects hit people. Experts say the best place to be is in an underground shelter, or a small, windowless room in the lowest part of a building. 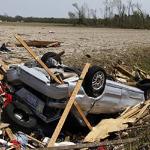 A car sits in a drainage ditch in Colerain, North Carolina, after a tornado ripped through the area Saturday

People driving during a tornado are told to find low ground and lay flat, facedown, with their hands covering their head. People in the path of a tornado often just have minutes to make life-or-death decisions.

BOB DOUGHTY: The deadliest American tornado on record was the Tri-State Tornado of March eighteenth, nineteen twenty-five. It tore across Missouri, Illinois and Indiana. About seven hundred people were killed.

A "tornado outbreak" is often defined as six or more tornadoes produced by the same weather system within a day. But the outbreak of April third and fourth, nineteen seventy-four, set a national record. It is remembered as the "Super Outbreak." One hundred forty-eight tornadoes struck during a twenty-four-hour period. More than three hundred people were killed and nearly six thousand others injured.

One tornado that was especially destructive hit Xenia, Ohio. The sound you are about to hear comes from the website www.xeniatornado.com. It is one man's recording of the tornado moving closer.

Even a weak tornado requires the right combination of wind, temperature, pressure and humidity. Weather experts can identify these conditions. And, when they observe them, they can advise people that tornadoes might develop. But they are not able to tell exactly where or when a tornado will hit. Tornado warnings still depend in large part on human observations.

Usually a community will receive a warning at least a few minutes before a tornado strikes. But each year there are some surprises where tornadoes develop when they are least expected.

BOB DOUGHTY: The tornado reporting system involves watches and warnings. A tornado watch means tornadoes are possible in the area. A tornado warning means that a tornado has been seen. People are told to take shelter immediately.

Yet tornadoes can be difficult to see. Sometimes only the objects they are carrying through the air can be seen. Some night-time tornadoes have been observed because of lightning strikes nearby. But tornadoes at night are usually impossible to see.

Tornadoes that form over water are called waterspouts. But tornadoes cover a much smaller area than hurricanes, which form over oceans.

Tornadoes can be measured using wind speed information from Doppler radar systems. Tornadoes usually travel in a northeasterly direction with a speed of thirty-two to sixty-four kilometers an hour. But they have been reported to move in other directions and as fast as one hundred seventeen kilometers an hour.

KATHERINE COLE: In the United States, the force of a tornado is judged by the damage to structures. Scientists inspect the damage before they estimate the severity of a tornado. They measure tornadoes on the Enhanced Fujita scale or the EF scale.

Ted Fujita was a weather expert who developed a system to rate tornados in the nineteen seventies. The EF scale is a set, or collection, of wind estimates. They are based on levels of damage to twenty-eight different kinds of structures and other objects. Tornadoes that cause only light damage are called an EF-zero. Those with the highest winds that destroy well-built homes and throw vehicles great distances are called an EF-five.

BOB DOUGHTY: Some people make a sport out of watching and following tornadoes. They are called tornado chasers or storm chasers. Their work can be seen in the extreme weather videos that are increasingly popular on television and on the Internet.

Some chasers do it just because it is their idea of fun. Others do it to help document storms and warn the public. Still others are part of weather research teams.

Recently, an international team of scientists completed a tornado research project called VORTEX2. More than one hundred researchers traveled throughout America's Great Plains in two thousand nine and two thousand ten. They used weather measurement instruments to collect scientific information about the life of a tornado. The goal of the project was to examine in detail how tornadoes are formed and the kinds of damage they cause.

A film about the VORTEX2 project opened at some theaters in the United States last month. The film includes never before seen images of tornadoes. To safely capture up-close film footage of tornadoes, some project participants traveled in a seven-ton, armored tornado intercept vehicle directly into tornadoes as they formed.

KATHERINE COLE: The National Weather Service says the United States gets more severe weather than any other country. For one thing, it is also bigger than most other countries. And it has many different conditions that create many different kinds of weather.

BOB DOUGHTY: This SCIENCE IN THE NEWS was written by Brianna Blake. June Simms was our producer. I'm Bob Doughty.

KATHERINE COLE: And I'm Katherine Cole. Read and listen to our programs at 51voa.com. And if you have a science question, send it to special@voanews.com. We might answer it on our program. Join us again next week for more news about science in Special English on the Voice of America.