UAE, Other Nations Target BlackBerry for Access to User Information

Update Required To play the media you will need to either update your browser to a recent version or update your Flash plugin.
By Mario Ritter
2010-8-5 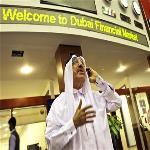 Photo: AP
A file photo of a man talking on his smart phone at the Dubai Financial Market in Dubai, United Arab Emirates.

BlackBerry service is facing limits or bans in some countries over the issue of government access to information on its network. Research in Motion, or RIM, based in Waterloo, Canada, makes BlackBerry communications devices. They run on the company's network and secure software. BlackBerry has forty-six million users worldwide.

This week, the United Arab Emirates announced it would block BlackBerry e-mail, web browsing and instant messenger services on October eleventh. The UAE says the services are a threat to national security because government officials cannot access or monitor users' information.

Then, Saudi Arabia said it would block BlackBerry service this week. The Saudi government told the country's three mobile phone operators to stop BlackBerry service for businesses and individuals this Friday. The Saudi Communications and Information Technology Commission did not say what services would be blocked. These moves renew concern among some people about efforts by the UAE and Saudi Arabia to control the flow of information. Both countries have banned some forms of media seen as harming national security.

The ban in the UAE could affect half a million BlackBerry users while Saudi Arabia has about seven hundred thousand users. Kuwait and Lebanon are also said to be considering restrictions. But Middle Eastern countries are not the only ones seeking greater access to BlackBerry information. India and China are among other countries also doing so.

RIM says its system is set up in a way that no one, including RIM, can access user information. The company also says it does not matter where their servers are based. Communications are made secure the moment they leave the BlackBerry device through encryption.

On Thursday, Secretary of State Hillary Clinton said the United States will hold talks with the UAE and other countries about possible bans on BlackBerry services. She said the United States knows there are reasonable security concerns about the service. But she added that there is also a right of free use and access.