Update Required To play the media you will need to either update your browser to a recent version or update your Flash plugin.
By VOA
2012-2-17 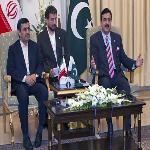 American and European officials say Iran may be serious about returning to talks about its nuclear program.

Catherine Ashton, the European Union's foreign policy chief, met with Secretary of State Hillary Clinton in Washington Friday. Later, Ms. Ashton talked to reporters about Iran's answer this week to a letter that she sent in October. Her letter asked Iran to return to the nuclear talks.

CATHERINE ASHTON: "There is a potential possibility that Iran may be ready to start talks. We will continue to discuss and make sure that what we are looking at is substantive. I am cautious and I am optimistic at the same time for this."

The United States and its allies believe Iran's goal is to develop nuclear weapons. Iran says its nuclear program is for peaceful, civilian purposes.

In the letter, Iran's chief nuclear negotiator, Saeed Jalili, said his government is ready to restart talks at the earliest chance. But in return, he said, the international community must respect Iran's right to peaceful nuclear energy.

Secretary Clinton said the United States and other major powers are still considering Iran's letter. But she said it shows that Iran recognizes some of their concerns.

HILLARY CLINTON: "Any conversation with Iran has to begin with a discussion of its nuclear program. And Iran's response to Cathy's letter does appear to acknowledge and accept that."

The United States and the EU have been increasing sanctions against Iran. On Friday the Society for Worldwide Interbank Financial Telecommunication said it is prepared to discontinue services to Iranian banks targeted by EU sanctions.

SWIFT is a member-owned cooperative used by banks and other organizations to exchange financial information. It said it is ready to act as soon as it gets a clear understanding of EU legislation currently being written. The United States has been urging the EU to block Iranian banks from access to the cooperative.

Speaking through an aide, Mr. Ahmadinejad blamed "some countries" for the problems facing the area, but did not name any countries.

MAHMOUD AHMADINEJAD: "Today, clearly all these powers are interfering in our internal affairs, in the affairs of our region with a military presence. We believe that the problems of the region must be solved regionally. We should deny others the opportunity to interfere in our affairs."

The presidents also discussed efforts to end hostilities between the Afghan government and the Taliban. The government has long said that Taliban chief Mullah Omar and other leaders are hiding in Pakistan. It says they are supervising Afghan militants with the help of Pakistan's main intelligence agency, the ISI. Pakistan denies the accusation.