Update Required To play the media you will need to either update your browser to a recent version or update your Flash plugin.
By VOA
2011-7-15 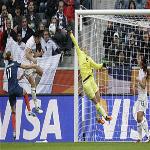 Two of the world's favorite activities -- soccer and wordplay -- are in the news this week.

On Wednesday the United States defeated France to reach the final. Striker Abby Wambach gave her team a two to one lead with a header off Lauren Cheney's corner kick in the seventy-ninth minute. Cheney had given the United States an early lead, but she told ESPN television that she credits Wambach for her efforts.

LAUREN CHENEY: "Not only is she at the right place at the right time, but she has more heart than anybody that I've ever played with. And I know that in the last minute, she's going to get it done."

Alex Morgan added another goal in the eighty-second minute. At twenty-two, she is the youngest player on the American team.

Japan defeated Sweden in the other semifinal game. Host nation Germany, the two-time defending champion, lost to Japan in the quarterfinals.

So that was news from the playing field. Now to the wordplay.

Commentators and bloggers often use the word "gate" when a politician is accused of trying to hide the truth. A recent example: "Weinergate." Congressman Anthony Weiner of New York denied, then later admitted, that he sent sexually suggestive messages and pictures to women. He resigned in June.

Next June will be forty years since the very first "gate." Watergate is the name of a group of buildings in Washington. In June of nineteen seventy-two, police arrested five men who broke into Democratic Party offices there.

Two Washington Post reporters, Bob Woodward and Carl Bernstein, linked the break-in to the committee to re-elect Republican President Richard Nixon. He resigned because of Watergate.

Another place name is "Armageddon." The Christian Bible says there will be a final battle there between the forces of good and evil at the end of time.

President Obama even used the term on Friday to describe proposals to avoid a crisis over raising the government's borrowing limit.

BARACK OBAMA: "It is constructive to say that if Washington operates as usual and can't get anything done, let's at least avert Armageddon."

These days, people joke about events like "Snowmageddon," the huge snowstorms that hit the Washington area a year ago.

Right now, officials in Los Angeles are warning drivers to avoid "Carmageddon." Road work will close a major north-south link this weekend. The work is part of a project to widen Interstate 405, also called the San Diego Freeway. The 405 will close for sixteen kilometers between the city's Westside and the San Fernando Valley. 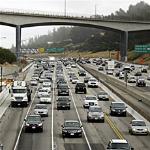 The Molholland Drive bridge over Interstate 405 in California will be demolished closing traffic for 53 hours.

The closure is planned for fifty-three hours, until Monday morning at five. California transportation official Mike Miles told TV station KABC that people normally try to avoid the 405 anyway because of heavy traffic.

MIKE MILES: "The biggest thing that's going to help is if the public stays away and stays home on this weekend. Most of the people go through their lives trying to avoid the 405. This is the one weekend we want to tell you, you really need to avoid the 405."

But Carmageddon or not, local businesses are offering special deals to keep people from staying home and not spending money. That would be the biggest disaster of all.

And that's IN THE NEWS in VOA Special English. I'm Christopher Cruise.