Update Required To play the media you will need to either update your browser to a recent version or update your Flash plugin.
By Mario Ritter
2010-10-14 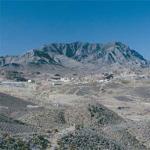 Photo: usgs.gov
The area near Molycorp's rare earths mine in Mountain Pass, California

Today we continue our report on the group of chemical elements known as rare earth metals. These are mined from the earth and used to make technology from mobile phones to missiles.

The United States once led the world in rare earths. Today China controls almost all production. Premier Wen Jiabao says China will not use these metals as a diplomatic weapon. But Japan says exports meant for that country have remained at Chinese ports as a result of a recent dispute.

Edward Cowle is president and chief executive of a company called U.S. Rare Earths. He and his partners gained rights to some land in the American West about fifteen years ago. They had been interested in thorium -- a radioactive element that can fuel nuclear reactors but not be processed into weapons.

EDWARD COWLE: "In these two years since we changed our name to Rare Earths, the media attention has been unbelievable."

The company has not started mining yet. It still has to get permits and work with other businesses to put operations in place. Ed Cowle says a lot of work remains.

EDWARD COWLE: "I would say conservatively the earliest that we could open the mine has to be six to seven years."

JIM SIMS: "Molycorp is the western hemisphere's only producer of rare earth products." 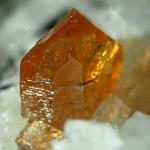 The mineral bastnasite can contain 15 or even 17 rare earth metals. But chemically separating the elements is costly and difficult

Molycorp says the largest reserves of rare earths outside of China are in its mine in Mountain Pass, California, and in the Mount Weld area of Australia.

Jim Sims says Molycorp spends only about ten percent on mining. The big cost is in chemically separating the rare earths from the minerals that carry them.

JIM SIMS: "Every rare earth deposit on the planet has all fifteen and sometimes all seventeen rare earths."

He says Molycorp raised about three hundred eighty million dollars when it sold stock to the public for the first time in July. The company aims to increase production to twenty thousand tons by two thousand twelve. It says that would more than meet current levels of demand in the United States.