US Poverty Rate Highest Since 1993

Update Required To play the media you will need to either update your browser to a recent version or update your Flash plugin.
By VOA
2011-9-16 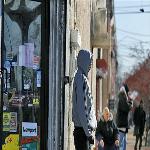 Photo: AP
A man stand outside a small store in Camden, New Jersey, which has the highest poverty rate in the nation.

A new report says the poverty rate in the United States last year was the highest since nineteen ninety-three. The official rate was 15.1 percent, up from 14.3 percent in two thousand nine.

Poverty meant yearly income, or earnings, of less than twenty-two thousand three hundred dollars for a family of four.

The new findings did come as a surprise to Michael Ferrell of the Coalition for the Homeless in Washington, DC.

MICHAEL FERRELL: "Unless there's a turnaround within the economy in the very near future, it's most likely to get worse."

The Census Bureau says median household income fell more than two percent from two thousand nine to two thousand ten. Median means half earned more and half earned less. Last year, the median income was about forty-nine thousand dollars. The Census Bureau says more than forty-six million people were living in poverty. It was the largest number since estimates began in nineteen fifty-nine. They included more than one-fourth of blacks and Hispanics, twelve percent of Asians and about ten percent of non-Hispanic whites.

Some economic measures were unchanged. Women in full-time, year-round jobs continued to earn an average of seventy-seven percent as much as men did.

The number of people without health insurance rose from forty-nine million to almost fifty million last year. But the rate -- 16.3 percent -- was about the same as in two thousand nine.

Experts say the biggest driving force of poverty is unemployment. About fourteen million Americans are unemployed. Millions more have stopped looking for work or wish they could work more hours.

Las Vegas, Nevada, is famous for its casinos and hotels. But the city was hit hard by the recession and the housing market crash that helped cause it. Former construction worker Richard Scanlon is disabled, but he says many able-bodied friends are out of work.

RICHARD SCANLON: "Ten, fifteen years ago, if you couldn't get a job in Vegas, you weren't looking for one. Now it's tough."

TERRY LINDEMANN: "We bring together Catholics, Protestants, Jewish congregations, Muslims, to open up their congregations at night to be overnight shelters."

Cassendra Waller is a mother of two. She got help to move into a new apartment.

CASSENDRA WALLER: "When you get a job and you're making a minimum wage, how do you pay a babysitter for two kids every day? I wound up homeless several times. And this is the worst I've seen the homeless in Vegas."

Stephen Brown is an economist with the University of Nevada, Las Vegas. He says the city is starting to get more visitors again. But he says that will not solve the bigger economic issues.

STEPHEN BROWN: "So what we really need is for the forces that were pushing population to Las Vegas in the past to resume. And that really means that the whole US economy needs to get moving again."