Update Required To play the media you will need to either update your browser to a recent version or update your Flash plugin.
By VOA
2010-7-9

Russia and the United States have completed the largest spy exchange since the Cold War. On Friday, at an airport in Vienna, Austria, an American plane and a Russian plane landed, parked side by side and exchanged occupants.

The United States freed ten admitted Russian agents. The men and women were arrested in late June and pleaded guilty on Thursday.

In exchange, Russia released four Russians serving prison sentences on charges of spying for the West. The men include Igor Sutyagin, an arms researcher who always denied the charges. Some considered him a political prisoner.

The United States deported nine Russians and an American citizen born in Peru. Some raised children while living quiet lives as married couples. An eleventh suspect disappeared after being freed on bail in Cyprus.

The group was accused of trying to gain information on American nuclear weapons, foreign policy and politics for the SVR -- Russia's foreign intelligence service.

The way both countries are handling the issue suggests that "neither side is interested in starting a fight." So says Andrei Koztunof of the New Eurasia Foundation in Moscow. Russia's Foreign Ministry praised the exchange, saying, "The action was taken in the general context of improved Russian-U.S. relations."

The ten were only charged with plotting to act as undeclared foreign agents. They were not charged with the more serious crime of espionage, so the extent of their success as spies is not clear.

One of the Russians, Anna Chapman, captured attention with her looks and stories of her New York party life. Her lawyer, Robert Baum, said she had not passed secret information to Russia or received any payment.

ROBERT BAUM: "The only allegations against her was that she communicated with a Russian official through a laptop to laptop communication, without the government specifying the nature of the communications."

Peruvian-born Vicki Pelaez was a columnist for a Spanish-language newspaper in New York. Her lawyer said she never knew that her husband of many years, Juan Lazaro, was really a Russian named Mikhail Vasenkov. 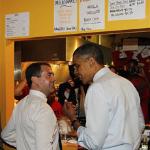 President Obama and Russian President Dmitry Medvedev ate hamburgers at a restaurant near Washington. That day, Mr. Obama said the two countries had succeeded in "resetting" their relationship.

In another development, Friday brought news of the death of Sergei Tretyakov, once Russia's top spy. He defected to the United States ten years ago. His wife and a friend said he died at his home in Florida on June thirteenth. They did not give the cause of death. Sergei Tretyakov was fifty-three years old.