Update Required To play the media you will need to either update your browser to a recent version or update your Flash plugin.
By VOA
03 July, 2013

Reaction appears mixed to a recent United States Supreme Court decision on affirmative action in university admissions. Affirmative action in admissions means that schools give special consideration to some racial or ethnic minorities. The goal is to create a more diverse campus, and to give more opportunities to groups that are under-represented in higher education.

The Supreme Court ruled that race can be one of many factors considered when a student applies to a college or university. The court said education benefits from having diverse student populations. 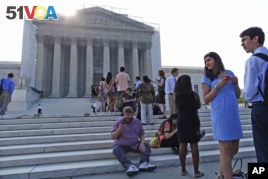 People line up in front of the Supreme Court in Washington, Jun. 24, 2013, before it opened for its last scheduled session.

Some legal experts expressed surprise at the decision. They thought the justices would strike down a 2003 Supreme Court ruling. That ruling let universities use race in admissions decisions, but also said race needs to be just one factor among others.

In the new decision, the justices did not deal with the question of affirmative action itself, as many observers had expected. The court did not decide whether the idea violates the right of equal protection under the law, as guaranteed by the constitution. Instead, the justices sent the case back to a lower court for further consideration.

A white woman who had been denied admission to the University of Texas at Austin brought the legal case. Abigail Fisher argued that it was wrong to reject her, when minority students with similar grades and test scores were accepted because of affirmative action.

Wade Henderson is president of the Leadership Conference on Civil and Human Rights. He said the new decision reconfirms that it is an America's interest to increase opportunities for everyone.

Justice Clarence Thomas, the only African-American on the Supreme Court, voted with the majority but wrote a separate opinion. His opinion strongly attacked affirmative action in college admissions as violating the constitution. He also said that the diversity by itself does not have any educational benefit.

Ada Meloy is general counsel for the non-profit American Council on Education.

"...that the colleges and universities should have the right to decide upon who will be admitted to the institution. And those that feel they need to consider race or ethnicity and make that decision should be able to do so, in line with the law that has been proclaimed by the Supreme Court since the 1970's."

She said it was not clear how many of the 4,000 or so higher learning institutions in the United States use those criteria in deciding which student to accept. Ms. Meloy said many of the schools do not generally give special consideration to their applicants' race or ethnicity.