US Voters Look to Women Candidates for Change

Update Required To play the media you will need to either update your browser to a recent version or update your Flash plugin.
By Brianna Blake
2010-6-11 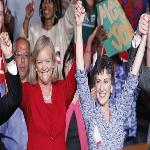 This week, twelve American states voted for candidates for elections in November. Tuesday was the busiest day of the primary season -- and women were the big winners.

In California, the Republicans nominated two businesswomen for governor and United States senator. Both are former heads of technology companies. They spent millions of their own money on their campaigns.

The nominee to replace Governor Arnold Schwarzenegger, who faces a term limit, is Meg Whitman. She led the online marketplace eBay. She will face Democrat and former governor Jerry Brown.

Carly Fiorina led Hewlett-Packard until she lost her job in two thousand five. She will try to deny a fourth term to Democratic Senator Barbara Boxer.

In South Carolina, state representative Nikki Haley won more votes than the three men who sought the Republican nomination for governor. But she was just short of a majority, so she will face a runoff election.

She is the daughter of Indian Sikh immigrants. And she is a favorite of the Tea Party, a conservative but loosely organized movement.

The campaign included accusations that she cheated on her husband, which she denied. 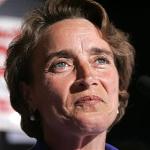 But labor unions and progressive groups tried to defeat her for opposing a "public option." That was the idea of a government health-insurance program. She also opposed efforts to make it easier for unions to gain members.

LARRY SABATO: "So actually, the message I see coming out of the primaries is that the party base on the Democratic and Republican side is actually fairly satisfied with the people who are representing them. That may not be true of the independents, including the Tea Party people. They will vote in November for the most part. But for now, we don't see the kind of ant-incumbent wave that many have been discussing."

Larry Sabato also says Democrats were happy that Republicans nominated very conservative candidates supported by the Tea Party. He says Democrats now see a much better chance to win some of those races.

The elections in November come midway in President Obama's term. Historically, the party in the White House -- currently the Democratic Party -- suffers losses in midterm elections. But incumbent Republicans have also lost primary races this year.

In California, voters passed a measure to replace their primary election system, starting next year. They agreed to a single primary for all candidates from any party, or no party, in congressional, statewide and legislative races. The two candidates with the most votes will face each other in the general election. Voters in Washington State approved a system like this in two thousand four.

And that's IN THE NEWS in VOA Special English, written by Brianna Blake. I'm Doug Johnson.