Update Required To play the media you will need to either update your browser to a recent version or update your Flash plugin.
By Jerilyn Watson, Caty Weaver and June Simms
2011-2-14 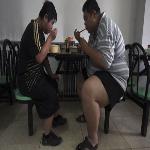 Photo: AP
Patients at a weight reduction hospital in Tianjin, in China, where obesity is on the rise as living standards improve

BOB DOUGHTY: This is SCIENCE IN THE NEWS in VOA Special English. I'm Bob Doughty.

BOB DOUGHTY: This month, a study of one hundred ninety-nine countries and territories confirmed what many people may have already suspected. People around the world are getting fatter. The study found that obesity has almost doubled since nineteen eighty.

Majid Ezzati at Imperial College London led the research team. He says the results show that obesity, high blood pressure and high cholesterol are no longer just found in wealthy nations. These are now worldwide problems.

FAITH LAPIDUS: Body mass index, or BMI, is a measure of a person's weight in relation to height. A person with a BMI of twenty-five to twenty-nine is considered overweight. The World Health Organization defines obesity as a body mass index of thirty or more.

Pacific island nations have an average BMI of around thirty-five -- the highest in the world. The study found that the United States had the single highest average among wealthy countries. American men and women had an average BMI of over twenty-eight. New Zealand was next. Japan had the lowest, at about twenty-two for women and twenty-four for men.

The report had some good news, however, about high blood pressure. The percentage of people with this major cause of heart attack and strokes has fallen since nineteen eighty. Dr. Ezzati credits improved testing and treatment in wealthy countries. He says a decrease in the use of salt and unhealthful fats probably also helped.

BOB DOUGHTY: Silicon Valley in northern California is home to many of the world's largest technology companies. These include Apple, Google, Oracle, Intel, Cisco Systems and Hewlett-Packard. The valley is also home to the Computer History Museum in Mountain View. It reopened late last year after nineteen million dollars worth of improvements. The project took nearly two years. 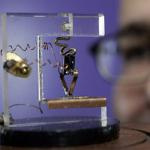 Senior curator Dag Spicer looks at a replica of the first transistor at the Computer History Museum in Mountain View, California

One of the additions is a permanent exhibit called "Revolution: The First 2000 Years of Computing." Alex Bochannek is a curator at the museum. He says the new exhibit tells the story of more than one thousand historical objects. He says one of the more popular items is a portable computer from nineteen eighty-one.

ALEX BOCHANNEK: "We think of portable computers today as laptops. But the Osborne One was about the size of a sewing machine and weighed twenty-four pounds. So, just being able to pick one of those up will help our visitors understand how difficult portability was about thirty years ago."

FAITH LAPIDUS: Visitors to the Computer History Museum can also see parts of one of the earliest large-scale electronic computing devices. The ENIAC or Electronic Numerical Integrator and Computer was designed during World War Two.

There are also pieces from the guidance computer that was used during the American space agency's Apollo missions.

Mr. Bochannek says the "Revolution" exhibit is about more than the history of modern computing. He says it tells a much larger story about how these developments have affected society and culture, especially in recent years.

The Computer History Museum plans to launch an online version of the exhibit on its website next month.

BOB DOUGHTY: Who would have thought that millions of people would buy a product containing living insects? A creative businessman named Milton Levine did, and he thought correctly. He and his brother-in-law, E. J. Cossman, created the Uncle Milton Ant Farm more than a half century ago. Today, grandchildren of the first ant colony owners are watching ants working hard on the farm.

Mr. Levine died recently at age ninety-seven. During his life, he saw the sale of more than twenty million of his ant colonies. He was part inventor, part businessman and part educator.

FAITH LAPIDUS: Milton Levine was not trained in the study of insects, also known as entomology. But he knew a lot about ants, and he designed an appealing way to share his knowledge. He respected the creatures. He sometimes said he had never stepped on an ant.

Mr. Levine's son Steven says his father began his career as a maker of unusual toys after World War Two. He had returned to his birthplace in Pittsburgh, Pennsylvania, after serving in the United States military. During the war, he built bridges in Germany for the invading allied troops of General George S. Patton.

BOB DOUGHTY: Steven Levine says his father got the idea for his future career from a business newsletter. The newsletter suggested that the best chances for jobs at the time were in bobby pins and toys.

Milton Levine did not want to make bobby pins, the small fasteners for women's hair. He and Mr. Cossman decided instead to make toys. They understood that American society was about to change. The huge population increase known as the Baby Boom was beginning. There would be a huge demand for children's playthings. 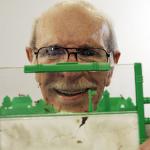 Milton Levine, co-inventor of the classic Ant Farm educational toy, poses with his invention in 2006

FAITH LAPIDUS: The two businessmen moved their company to Hollywood, California, in nineteen fifty-two. At that time, Milton Levine got the idea for an educational toy that would earn him lasting fame. He saw ants parading around a swimming pool while he was at an Independence Day celebration.

The sight made Mr. Levine remember how much he had liked watching and collecting ants as a boy on his uncle's farm. Those thoughts gave him the idea for the Uncle Milton Ant Farm.

BOB DOUGHTY: Milton Levine and E. J. Cossman developed a narrow, green plastic container. The top looked like a farm, showing a farmhouse, a barn, a bridge and a windmill. Under those images was a divider that separated the ants' underground and above-ground areas. Under that was the sand where people could watch the ants digging passageways.

There was a problem before the product could be sold, however. Where would the company get enough ants? The company placed a newspaper advertisement asking for what they called ant-pickers. The pickers recovered a fine supply of ants from the desert.

FAITH LAPIDUS: The businessmen sold the first finished Uncle Milton Ant Farms through the mail. Buyers also received their ants by mail. But the ants arrived separately from the farm. The insects arrived in a vial, as they do today. A stopper device on the tube-like container held food for the ants as they traveled to their new homes.

BOB DOUGHTY: The first Uncle Milton Ant Farms were an immediate success. They were sold in nineteen fifty-six. Two years later, two million of the educational toys had sold.

Through the years the toys continued to attract ant-watchers. When his father retired, Steven Levine became the company's head in the nineteen eighties. Last year, the company was sold to private investors. But people continue to buy Uncle Milton Ant Farms from stores and order from websites.

FAITH LAPIDUS: Materials included with the products tell far more than how to care for the ants. For example, people receiving an Uncle Milton Ant Farm learn that the little insects are strong. Some can carry loads fifty times heavier than they are.

A writer in his thirties remembers owning an Uncle Milton Aunt Farm when he was about five years old. He says he became very good at numbers by counting the ants.

BOB DOUGHTY: This SCIENCE IN THE NEWS was written by Jerilyn Watson, Caty Weaver and June Simms, who also was our producer. I'm Bob Doughty.

FAITH LAPIDUS: And I'm Faith Lapidus. Join us again next week for more news about science in Special English on the Voice of America.