Verizon and Google Propose Rules of the Road for the Internet

Update Required To play the media you will need to either update your browser to a recent version or update your Flash plugin.
By Mario Ritter
2010-8-19 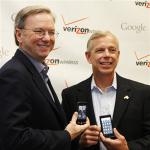 Last week, Verizon and Google proposed a plan they say could keep the Internet open while supporting investment in high-speed Internet service.

Verizon has the nation's biggest wireless network while Google is the biggest Internet search engine. The proposal was a surprise because the two companies have been on opposite sides of the debate over net neutrality.

That is the idea that all content on the Web should be treated equally.

Internet service providers want to be able to charge more for heavy Internet traffic or users who want special services. The Federal Communications Commission regulates telephone, cable and satellite communications. But its power to regulate Internet service has been questioned in the courts.

The new proposal calls for rules barring service providers from preventing users from sending and receiving legal information of any kind. Users also could not be prevented from linking any application, service or device they choose to the Web.

And broadband Internet providers would be barred from discriminating against content and would have to be open about their policies.

Supporters of net neutrality criticized the proposal for not including wireless providers. Wireless broadband is among the fastest growing parts of the Internet.

Others oppose the creation of a "two-tiered" system on the Internet in which some content gets a fast lane and other content goes slowly.But Daniel Brenner says such a system already exists.

DANIEL BRENNER: "In some ways there are two tiers today. In other words, there's the public Internet which we all use for Web surfing, e-mail and sometimes for voice. And then there are managed networks."

Daniel Brenner is a partner at the law firm Hogan Lovells in Washington. He says service providers want to be able to charge more because they build networks out to their customers across the country. Such companies are the so-called "last mile" providers.

But, the Internet is really a network of networks which exchange traffic all the time and compete with each other. And not all networks reach the last mile to a customer's door.

Paul Kouroupas of Global Crossing says his company wants to make sure agreements between service providers are honored on all networks. That way, a service promised by Global Crossing on its fiber optic network will be extended all the way to a customer's door — even if another company carries the service that last mile.

The Verizon-Google proposal offers suggestions for a debate that is not likely to end soon. Daniel Brenner says the FCC needs clearer guidelines from Congress. And that's the VOA Special English Economics Report, written by Mario Ritter. I'm Steve Ember.