In Study, B Vitamins Lessen Brain Shrinkage in Some Older Patients

Update Required To play the media you will need to either update your browser to a recent version or update your Flash plugin.
By Jerilyn Watson and June Simms
2010-10-4 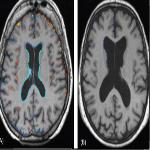 Photo: plosone.org
MRI scans showing brains of two patients in the Oxford study. The patient on the left did not have active vitamin treatment, while the person on the right did.

FAITH LAPIDUS: And, I'm Faith Lapidus. Today, we will tell about possible good news for people seeking to prevent Alzheimer's disease. We will also tell about two ancient creatures that scientists believe were close relatives of a famous dinosaur.

Retired Oxford University pharmacology professor David Smith was a leader of the study. He praised the use of the vitamins as simple and safe. He also said researchers do not yet know if B vitamins could prevent or slow Alzheimer's disease.

A report about the Oxford study appeared in PLoS One, a publication of the Public Library of Science.

FAITH LAPIDUS: Vitamins are important for good health. These complex organic substances help to carry out chemical changes within cells. If we do not get enough of the vitamins we need in our food, we are at risk of developing a number of diseases.

Some shrinkage of the brain is thought to happen normally as people grow older. Yet studies have shown a link between a larger shrinkage and Alzheimer's disease.

BOB DOUGHTY: The Oxford researchers tested one hundred sixty-eight people over twenty-four months. All of those tested were over age seventy. One group in the study took B vitamins every day. They swallowed tablets containing folic acid, vitamin B-6 and vitamin B-12. A second group took placebos -- harmless substances that did not contain the vitamins or folic acid.

Two years later, the researchers used magnetic resonance imaging tests to study both groups. They also tested the thought processes of each person. Those taking the vitamins had up to fifty percent less brain shrinkage than those taking the placebos.

FAITH LAPIDUS: Professor Smith says the researchers chose B vitamins for the study because they control homocysteine, an amino acid in the blood. Earlier studies have linked high homocysteine levels to a greater risk of Alzheimer's.

The Oxford researchers say about one in six people over age seventy has problems with mental operations. They say half of these people develop serious loss of mental ability, as in Alzheimer's disease. Over time, the disease robs people of their memories. Finally, it takes away their ability to care for themselves.

BOB DOUGHTY: Rebecca Wood is chief officer of the Alzheimer's Research Trust in London. She described the results of the study as important. However, she said an extended study should be made of people who might be expected to develop Alzheimer's.

Professor Smith had a warning for older adults worried about memory loss. He said they should talk to their doctors before starting to take the vitamins. He said the vitamins could speed the growth of some cancers.

FAITH LAPIDUS: In two thousand eight, the Journal of the American Medical Association published a study of older patients with mild to moderate Alzheimer's disease. Three hundred forty people took part in the study. Of those, two hundred two took vitamins. One hundred thirty eight others got placebos.

The results did not show a difference in loss of abilities such as attention, language and memory. That was true whether or not the people took the vitamins.

BOB DOUGHTY: In other research news, American scientists say people with a special marker in their genes develop Alzheimer's faster than others. The journal PLoS Genetics published the finding of a scientific team from Washington University in Saint Louis, Missouri.

The scientists said a change of a gene that governs a protein known as tau strongly influences the rate at which the disease develops. Other studies have linked the tau protein to the development of Alzheimer's.

FAITH LAPIDUS: The recently announced World Alzheimer Report places a shocking financial cost on care linked to dementia, or loss of mental abilities. Alzheimer's is the most common of the dementia diseases. The report says dementia will cost the world six hundred four billion dollars this year. That is more than one percent of the world's total amount of money from goods and services.

The report urges the World Health Organization to make loss of mental abilities a cause of major interest. Campaigners say more investment in care and research is necessary.

Martin Prince of Britain's Institute of Psychiatry, at King's College in London, was a writer of the report. Professor Prince said nations around the world need to develop better plans for caring for the millions who have the disease.

BOB DOUGHTY: You are listening to the VOA Special English program SCIENCE IN THE NEWS. With Faith Lapidus, I'm Bob Doughty in Washington. 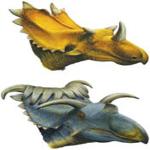 Scientists and explorers in the United States have discovered two new species of horn-faced dinosaurs. The scientists believe the dinosaurs are close relatives of the plant-eating triceratops. These creatures lived more than sixty-five million years ago, during Earth's late Cretaceous period.

The triceratops is famous for having three horns growing on its head. The scientists say the two newly discovered dinosaurs had even more horns. They say the smaller of the two had fifteen horns. There was one over its nose, one on each cheekbone and one above each eye. There were also ten horns along the edge at the back of its skull. 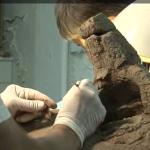 PLoS One published a report about the discovery. Paleontologist Scott Sampson was the lead writer of the report. He says the huge skull and many horns of Kosmoceratops make it one of the most amazing animals ever found. He believes the creature used its horns to frighten off members of the same sex, and to interest members of the opposite sex.

BOB DOUGHTY: The second newly discovered species was named Utahceratops gettyi. Its remains were also found in Utah. Mike Getty is a paleontology collection manager at the Utah Museum of Natural History. He also discovered this animal.

The skull of the Utahceratops was two and three tenths meters long. It had one horn on each side of its head, short sideways facing horns above each eye, and one horn above its nose. The dinosaur stood about two meters tall at its shoulder and hips, and was between six and seven meters long.

FAITH LAPIDUS: The dinosaur remains were discovered in an area called the lost island continent of Laramidia. Scientists say it formed when high sea levels flooded the middle of North America, splitting the continent in two for millions of years during the late Cretaceous period.

The eastern landmass was called Appalachia. The western land mass was known as Laramidia. It reached from what is now New Mexico to Alberta, Canada. Utah is now in what was the southern part of Laramidia.

Scott Sampson says it is one of the last great dinosaur bone-yards in the United States. He also says this is an exciting time for paleontologists. Over the past twelve years, scientists have discovered more than ten dinosaur species in the area. Most of those found were from species new to scientists.

The Utah Museum of Natural History is showing the skulls of the newly discovered dinosaurs through the end of the year. They will become part of the museum's permanent collection when it moves to a new building next year.

FAITH LAPIDUS: This SCIENCE IN THE NEWS was written by Jerilyn Watson and June Simms, who was also our producer. You can read scripts and download audio at 51voa.com. You can also find us on Facebook, Twitter, YouTube and iTunes at VOA Learning English. I'm Faith Lapidus.

BOB DOUGHTY: And I'm Bob Doughty. Listen again next week for more news about science in Special English on the Voice of America.