Update Required To play the media you will need to either update your browser to a recent version or update your Flash plugin.
By Jerilyn Watson
2011-9-10

STEVE EMBER: For almost twenty years, that was how Walter Cronkite would end his newscasts. Americans all knew him. So did many world leaders. Today's news anchors could only hope for such recognition. He was often called the most trusted man in America.

He anchored the "CBS Evening News" until nineteen eighty-one. The sixties and seventies produced more than enough stories to fill a daily newscast. Those were years of social change and civil rights protests.

Years that saw John Kennedy, his brother Robert and Martin Luther King all murdered, the war in Southeast Asia expand, a president resign. Years of worry that the same rockets that could take people to the moon could also bring nuclear war to Earth.

And years when most of us still thought of a "mouse" as a small creature. Yet smart minds were thinking up the technology behind today's computers and the Internet.

SHIRLEY GRIFFITH: Walter Cronkite brought it all home each evening, Monday through Friday. As President Barack Obama said in a statement: "He was there through wars and riots, marches and milestones, calmly telling us what we needed to know."

And when the anchorman was not in front of the camera, there was a good chance he was on his boat. He went sailing up until almost his final days. He died on July seventeenth, two thousand nine, at the age of ninety-two.

STEVE EMBER: Walter Cronkite was born on November fourth, nineteen sixteen, in Saint Joseph, Missouri. His father was a dentist, his mother a housewife.

With young Walter, the family moved from the Midwest to Texas. He worked on his high school newspaper and later left the University of Texas at Austin to become a journalist. He was a newspaper and radio reporter and sports announcer.

In nineteen forty he married Mary Elizabeth Maxwell, known as Betsy. They had three children and were together for nearly sixty-five years, until Betsy died in two thousand five.

He landed in Holland with American soldiers in a glider. And he was in a military plane overhead as Allied forces stormed the beach at Normandy, France. It was June sixth, nineteen forty-four, the start of the Allied invasion of Europe, the final push to defeat Nazi Germany.

STEVE EMBER: One day during the war, the famous journalist Edward R. Murrow offered him a job. It was a chance to report for a major television network, CBS, the Columbia Broadcasting System.

Yet TV was still young then. Walter Cronkite decided to stay where he was. United Press raised his pay and later made him its chief in Moscow. But in nineteen fifty he accepted another offer and went to work for CBS.

One of his early programs was a history show where he questioned actors playing people like Aristotle and Joan of Arc. But he was a serious newsman, and in nineteen fifty-two he led CBS' coverage of the national political conventions. They were the first to be televised coast to coast.

The program was only fifteen minutes long then. It took him two years to get his wish to extend it to thirty minutes. He also became managing editor, which expanded his influence over the program.

WALTER CRONKITE: "I participate very directly in the entire process -- in the decision of what stories we cover, in the decision on how we're covering them, what length of time we're going to give to them. It's a continuing process. I write part of the broadcast. Every bit of copy that goes on the broadcast passes through my hands. I edit every word that I say, I say no words that have not gone through my hand, many of them my own."

Walter Cronkite met some of the most important people of his time. This was the time of the Cold War between the United States and the Soviet Union. In one interview, though, he asked President John F. Kennedy about another conflict that was growing then.

WALTER CRONKITE: "Mister President, the only hot war we've got running at the moment is of course the one in Vietnam."

JOHN KENNEDY: "I don't think that, uh, unless a greater effort is made by the government to win popular support, that the war can be won out there."

STEVE EMBER: Americans would come to find truth in Kennedy's words. But, just two months after that interview, shots were fired at his open-top car. As we will hear later, Walter Cronkite had the sad duty of reporting that the young president was dead.

Happier moments came as he reported on the American space program. In July of nineteen sixty-nine he was almost speechless when Neil Armstrong became the first person to walk on the moon.

SHIRLEY GRIFFITH: Walter Cronkite rarely expressed his own opinions. That was not a reporter's job. But in the late sixties he went to report on the war to prevent a communist takeover of South Vietnam.

President Lyndon Johnson and his advisers kept telling Americans that the United States was making progress. Walter Cronkite went to see for himself. Then, in a commentary in February of nineteen sixty-eight, he said the war seemed unwinnable.

WALTER CRONKITE: "It is increasingly clear to this reporter that the only rational way out then will be to negotiate."

SHIRLEY GRIFFITH: Some people denounced him and questioned his loyalty. Others praised him for "speaking truth to power," as some might say.

Several weeks later, Lyndon Johnson surprised Americans and announced that he would not seek re-election. The unpopular war had cost him support.

STEVE EMBER: It was Richard Nixon who brought home most of the troops before South Vietnam fell to the north in nineteen seventy-five. But it was also Nixon who became the first and only American president to resign. Americans learned from the press that there was political corruption in his administration.

Night after night, millions turned to Walter Cronkite for the latest developments. There were other anchors and other networks. But people thought of him like family -- "Uncle Walter."

He anchored the "CBS Evening News" for nineteen years. He was sixty-four when he stepped down on March sixth, nineteen eighty-one. But he explained that he was not leaving the network.

WALTER CRONKITE: "Old anchormen, you see, don't fade away; they just keep coming back for more. And that's the way it is. Friday, March sixth, nineteen eighty-one."

STEVE EMBER: I remember the afternoon of November twenty-second, nineteen sixty-three. I was a first-year student at Johns Hopkins University in Baltimore, and was relaxing between classes at the student union building. A TV was on. My eyes were elsewhere, but my ear was caught by the unmistakable voice of Walter Cronkite.

The first bulletins coming in from Dallas were read by Cronkite over the CBS News "bulletin" slide.

Before long, though, there were pictures, with Cronkite at his desk in the CBS newsroom in New York. 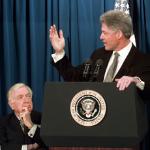 President Clinton speaks during an address before the Conference on Free Television and Political Reform in Washington. Walter Cronkite served as chairman for the Free TV for Straight Talk Coalition

For so many of us, the presidency of J.F.K. represented a time of promise. "This could not be happening" was the sentiment expressed as a growing crowd gathered around that black-and-white TV set. And Walter Cronkite, in measured tones, informed us that yes it was.

What I'll always remember was seeing him, about an hour later, momentarily take off his thick dark rimmed glasses, and announce:

You could see the flash of emotion as Cronkite removed and replaced his glasses and regained his composure.

WALTER CRONKITE: "Vice President Lyndon Johnson has left the hospital in Dallas, but we do not know to where he has proceeded. Presumably, he will be taking the oath of office shortly, and become the thirty-sixth president of the United States."

But going beyond this trusted anchor's solid presence in delivering such news, you have to know something about television news in that era. There wasn't the clutter of crawls, flashing graphics or other moving "stuff" that we see today.

There was Walter Cronkite in shirtsleeves, with a microphone in front of him. That was it -- nothing to distract the senses from the message. It was up close, and very personal.

It was not long after the Kennedy assassination that I actually got to meet Mister Cronkite. He was anchoring live coverage of the nineteen sixty-four Maryland Democratic primary election, originating in Baltimore.

I was hired in a minor role on the CBS production team for that night's broadcast. I can't say I remember all that much about the experience, other than it being very fast-paced.

But what I do remember was, at the end of that long, continuous coverage -- it must have been about two a.m. -- Cronkite sat down briefly with us production functionaries to chat.

I could not begin to tell you what we spoke about. It was enough to be in the presence of this great anchor I so admired, and to realize he was not above having a beer at the end of a very long broadcast with low-level support people.

That was the sort of thing that made a young man with broadcasting stars in his eyes ... glow in the dark. I'm Steve Ember.

SHIRLEY GRIFFITH: And I'm Shirley Griffith. Our program was written by Jerilyn Watson and produced by Dana Demange. You can find transcripts, MP3s and podcasts of our programs at 51voa.com. Join us again next week for PEOPLE IN AMERICA in VOA Special English.