What Kinds of Changes Will Arab Unrest Bring?

Update Required To play the media you will need to either update your browser to a recent version or update your Flash plugin.
By VOA
2011-2-4 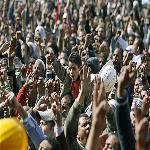 Earlier this week, Hosni Mubarak promised to leave office, but not until elections in September. President Obama spoke twice with the Egyptian leader by phone and said an "orderly transition" must begin now.

Supporters of Mr. Mubarak attacked protesters and reporters, but the protests continued in Cairo and other cities.

Opponents of Mr. Mubarak demanded that he leave office now. They declared Friday the "Day of Departure." Supporters of the Egyptian president declared it the "Day of Loyalty."

Protests also took place in other Arab countries this week.

In Jordan, hundreds of people demonstrated Friday to pressure the newly chosen prime minister to make promised political reforms. The demonstration in Amman came a day after Jordan's main Islamist opposition party met with King Abdullah to discuss its demands.

Some people have called for the newly named prime minister to resign. But leaders of the opposition Muslim Brotherhood say they will give Marouf al-Bakhit a chance to seek reform.

King Abdullah dismissed his government this week following weeks of anti-government protests. The king says reforms have been slow. He says all parties should work together to help increase the role of citizens in decision-making.

One of the demands of the Muslim Brotherhood is to change the constitution to involve parliament in appointing prime ministers. Currently only Jordan's king has that right.

In Yemen, tens of thousands protested in the capital, Sana'a, on Thursday. They called it a "Day of Rage."

"No to corruption," they say. "No to dictatorship." Others demonstrated in support of President Ali Abdullah Saleh. 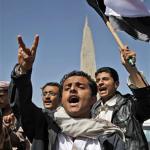 Yemenis demonstrating against the government, in Sanaa, Friday

Mr. Saleh has been in power since nineteen seventy-eight. The Yemeni leader has been an ally of the United States in fighting terrorism.

His latest promise to leave office came Wednesday. He said he would leave in two years when his term ends, and that his son would not replace him.

Lutfi Shatara of the Yemeni news agency, Aden Press, says the protesters have taken their lead from the uprising in Tunisia.

LUTFI SHATARA: "What happened in Tunisia -- it gives the people in the Middle East belief in themselves."

Nadim Shahadi is a Middle East analyst with Chatham House in London. He thinks the American-led invasion of Iraq in two thousand three led to what is happening now in the Arab world.

NADIM SHAHADI: "I believe that the trigger for this was the fall of the statue of Saddam Hussein. This was a huge shock to the region."

Iran's top leader has praised the anti-government protests in Egypt and Tunisia. Ayatollah Ali Khamenei called the demonstrations an "Islamic awakening." He accused Hosni Mubarak of serving the United States and Israel.

There have also been protests is Lebanon, although for different political reasons. Haleem is an international affairs student in New York. He is from Lebanon, but worries about Egypt.

HALEEM: "I am just afraid of the transition and what happens next because we can see for example what happened in the Iranian revolution, and I cannot really rule out the Iranian case to repeat itself in Egypt.

"It can have also many spillover effects, either on Israel, and then if on Israel, it can also have some impacts on Lebanon. The Middle East is like a system by itself."