What the Arab Spring, Europe Protests Have in Common

Update Required To play the media you will need to either update your browser to a recent version or update your Flash plugin.
By VOA
2011-8-19 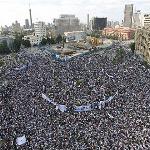 Photo: AP
Thousands of Egyptians protest in Cairo's Tahrir Square in April. The crowds were demanding the ouster of former President Hosni Mubarak.

Experts say political unrest in the Arab World and protests in Europe have more in common than it may seem.

Mary Kaldor was part of the opposition movement in Hungary during the Cold War. She is now a professor of global governance at the London School of Economics.

MARY KALDOR: "People assumed that somehow the Middle East was different and that was based on assumptions that somehow Islam is different -- 'It's not like us.' And that was an assumption that underpinned the war on terror, too. And I think what's so wonderful about the Arab Spring is that it's disproving that assumption. It's showing that Arabs are just as democratic as everyone else."

As the Arab Spring grew, protests also began in parts of Europe.

In Athens, thousands protested cuts in government spending and other budget reforms. Protesters occupied Syntagma Square outside Greece's Parliament. Professor Kaldor says the anger was similar to what the Arab demonstrators felt.

MARY KALDOR: "It's all about, I think, a failure of representation, a feeling that the political class is one class, 'We can't influence them, it's outrageous that they're suddenly saying that we have to pay for what the banks did.' And I think that there's a similar feeling of outrage in the Arab world. So I think there are very many similarities between what's happening in Europe and what's happening in the Arab world."

In London, British protesters demonstrated earlier this year against their government's cost-cutting measures. Owen Tudor is international secretary for the Trades Union Congress in Britain.

OWEN TUDOR: "I think there are clear differences for what's going on in different countries. We're talking about democracies in Europe, dictatorships across much of North Africa. But many of the causes of what's happened have been very similar. It's about the economic crisis."

Israel recently had some of its largest demonstrations ever. Israelis have criticized housing costs, wages, taxes and rising prices for food and fuel. Prime Minister Benjamin Netanyahu is promising economic reforms but has failed to satisfy social activists.

Some observers see the Arab Spring coming to a halt in Libya and Syria. But Professor Kaldor says the protests have already changed the Arab world.

MARY KALDOR: "Nineteen eighty-nine brought an end to the Cold War. I think what twenty-eleven did was to sideline the war on terror. It marginalized al-Qaida. Osama bin Laden may have been physically killed in Pakistan, but he's been politically killed by the demonstrations in the Middle East."

The protests in the Arab world might never have amounted to much without the use of social media to help organize protests. 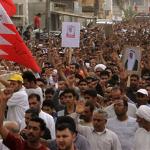 A crowd in Bahrain shouts anti-government statements at a funeral in April.

Today, many Bahrainis say they are afraid to use social media. Abdulnabi Alekry is chairman of the Bahrain Transparency Society. He says the government's use of social media to help identify opponents has pushed the country's Sunnis and Shi'ites farther apart.

ABDULNABI ALEKRY: "It is causing a lot of damage to the national unity and it is causing even suspicion between people who work together or live together or are in the same society or club. It is a source of concern."

Al-Jazeera television recently showed how a Facebook page helped lead officials to a twenty-year-old Shi'ite woman. Visitors to the page were asked to identify her "and let the government take care of the rest." She was reportedly arrested and tortured.

Bahrain is not the only country said to be using social media to find government opponents. Syrian security forces have also been accused of using sites like Facebook and Twitter to identify activists.