What to Do About 'Reverse Brain Drain' in US?

Update Required To play the media you will need to either update your browser to a recent version or update your Flash plugin.
By Meredith Buel
2011-11-2 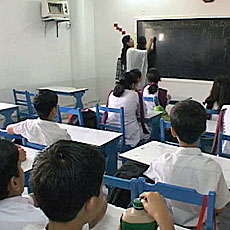 In two thousand nine, foreign students earned up to two-thirds of the physics and engineering doctorates awarded by American colleges and universities.

Xiao Qin from Beijing is studying for a PhD in computer science at Georgetown University in Washington. He would like to work for Google, Yahoo or Microsoft.

XIAO QIN: "Obviously, we prefer to stay here for several years, but if we cannot get any valid visa we have to leave."

So far no agreement has been reached on how to stop this so-called reverse brain drain. The loss of highly skilled workers usually involves developing countries losing them to wealthier ones.

Critics say immigration policies in the United States are too restrictive. One of those critics is Representative Zoe Lofgren, a Democrat who represents parts of Silicon Valley in California. She spoke at a recent congressional hearing on the issue.

ZOE LOFGREN: "While we once asked the brightest minds in the world to come and make their homes here, we now turn them away. Having educated and trained the world's best students in our universities, we no longer welcome them to enrich this nation."

High-tech companies look for workers at the nation's top universities. Some companies, including Texas Instruments, say it can take ten years for their foreign workers to become permanent residents. Darla Whitaker is a senior vice president at Texas Instruments.

DARLA WHITAKER: "This is not sustainable. It hurts our company and our industry and it places burdens and stresses on our employees."

The United States limits the number of immigrants from other countries on a country-by-country basis. Students from countries with large populations generally have to wait the longest for a "green card," or proof of permanent residency. A group called the National Foundation for American Policy says a highly skilled Indian worker could have to wait up to seventy years.

Vivek Wadhwa studies immigrants who start their own companies. He says the United States needs to change its immigration policies.

And that's the VOA Special English Education Report. You can watch a video on this subject at 51voa.com. And you can share your own experiences with studying or working in the United States. You can also find transcripts and MP3s of our programs and now PDFs for e-readers. I'm Christopher Cruise.