Update Required To play the media you will need to either update your browser to a recent version or update your Flash plugin.
By VOA
2010-6-29 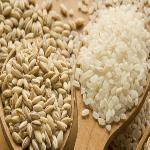 Rice is an important part of many people's diets. Researchers from the Harvard School of Public Health in Massachusetts have released a report about rice. It shows that eating white rice increases the risk of Type Two diabetes. However, eating brown rice reduces the risk of the disease.

More than thirty-nine thousand men and one hundred fifty-seven thousand women took park in the study. They were asked about their diet and day-to-day activities, as well as any pre-existing diseases. The study found that the people who ate five or more servings of white rice per week had a seventeen percent increased risk of developing Type Two diabetes. But those who ate two or more servings of brown rice a week had an eleven percent reduced risk of getting the disease.

Brown rice is the grain in its natural form. White rice results after it has been refined. This involves removing the outer cover, including the husk, bran and germ. Only the inner white kernel is left. White rice is often enriched to replace some nutrients lost during the refining process.

Qi Sun is the lead writer of the report. He says the outer parts of brown rice slow down the work of the body's digestive enzymes into starch. This means that the release of sugar into the bloodstream is slower after eating brown rice compared to white rice.

A diet of foods that quickly release sugar into the bloodstream has been linked with a greater risk of Type two diabetes. The exact reason for this is not known.

However, brown rice does not last as long as white rice because of the oil-rich layer of bran. This makes it less usable in poor communities. The International Rice Research Institute is working to develop kinds of white rice whose starch is released more slowly.