Update Required To play the media you will need to either update your browser to a recent version or update your Flash plugin.
By Mario Ritter
2011-11-5 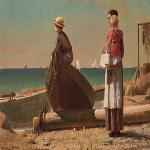 BARBARA KLEIN: And I'm Barbara Klein with PEOPLE IN AMERICA in VOA Special English. Today we tell about Winslow Homer, considered to be the greatest American artist of the nineteenth century. Homer created pictures that showed the relationship between humans and nature. The strong, clear images he drew and painted matched the wild, developing and proud United States of the late eighteen hundreds.

STEVE EMBER: Winslow Homer was the second of three sons of Henrietta Benson and Charles Savage Homer. He was born in Boston, Massachusetts in eighteen thirty-six and grew up in Cambridge. His father was an importer of tools and other goods. His mother was a painter. Winslow got his interest in drawing and painting from his mother. But his father also supported his son's interest. Once, on a business trip to London, Charles Homer bought a set of drawing examples for his son to copy. Young Winslow used these to develop his early skill.

BARBARA KLEIN: Winslow's older brother Charles went to Harvard University in Cambridge. The family expected Winslow would go, too. But, at the time, Harvard did not teach art. So Winslow's father found him a job as an assistant in the trade of making and preparing pictures for printed media. At age nineteen, Winslow learned the process of lithography. This work was the only formal training that Winslow ever received in art.

STEVE EMBER: Winslow did this work for about two years. Then the young man decided to become an independent illustrator, someone who makes drawings and pictures for a living. 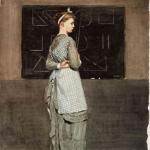 He worked in Boston for a few years, drawing illustrations for stories in several newspapers. He also did work for a magazine that was different from any other of the time. Harper's Weekly, in New York City, needed good illustrations and had lots of space for them. The young Winslow began to establish himself as an artist in demand.

BARBARA KLEIN: In eighteen fifty-nine, Winslow Homer moved to New York City to work for Harper's Weekly. Homer also started to paint seriously. He hoped to go to Europe to study painting. But, something would intervene that would change the direction of Winslow Homer's artistic work. Harper's magazine would send him to draw pictures of the biggest event in American history since independence. It was the Civil War between the Union and the rebel southern states.

STEVE EMBER: Winslow Homer went to Washington, D.C., in eighteen sixty-one. He drew pictures of the campaign of Union Army General George McClellan the next year. His pictures of the war showed the many ways that conflicts affect people.

In one illustration, he showed Union soldiers on horses advancing heroically. The Southern Confederate soldiers are shown forced under the feet of the horses, while the horsemen hold their swords high. The illustration is called "The War for the Union, Eighteen Sixty-Two — A Cavalry Charge."

BARBARA KLEIN: In another famous illustration, "The Army of the Potomac — A Sharp-Shooter on Picket Duty," Homer showed a different side of war. A soldier sitting in a tree is holding a rifle. He is aiming at a target far in the distance. Many critics say the picture shows the cold, mechanical nature of warfare, bringing death to the unsuspecting.

Homer painted two Union soldiers preparing a meal. The musicians are in the distance. The two soldiers appear to be stopped in the middle of their preparations by thoughts of home and family.

STEVE EMBER: Critics widely praised Homer's work during the Civil War. His work gained him membership in what is now called the National Academy. One painting, "Prisoners from the Front," was chosen to represent the United States at the Exposition Universelle. This event was held in Paris, France in eighteen sixty-six. Homer went to Europe for the first time. However, little is known about his stay in Europe. 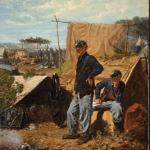 BARBARA KLEIN: The next major change in Winslow Homer's life was a decision to work in a new medium. Until now, Homer had used oil-based paints. Colorful substances are mixed with oil. These thick paints can be spread in layers, one over another, to produce interesting effects of light and color.

STEVE EMBER: Watercolor paint is color, or pigment, dissolved in water. The paint is thin. Sometimes you can see through the paint to the paper underneath. Watercolor paint can be used to color drawings or by itself. It is a much faster medium than oil painting. But it is a different and difficult skill to learn.

Homer's decision to use watercolor may have been connected with another major decision. Two years after he started using watercolor, he stopped illustrating for magazines like Harper's. In doing so, he ended a good way to earn a living. Instead, he decided to make a living only from selling his paintings. He was completely independent. Just as he said he always wanted to be.

BARBARA KLEIN: One of Homer's best paintings from this period is called "Breezing Up." It was shown for the first time in eighteen seventy-six. It shows three boys and a man in a small sailboat. A strong wind fills the sails. The man pulls in the sail, causing the boat to gain speed. One of the boys holds the rudder, which controls the direction of the boat. The two other younger boys hold on for the ride.

"Breezing Up" is considered one of Homer's finest paintings. Today, it is part of the permanent collection of the National Gallery of Art in Washington, D.C.

STEVE EMBER: In the late eighteen seventies, experts say Homer experienced some kind of crisis. Before, he had been a very social person. But after this period, he withdrew from social activities. Some critics say he had an unhappy relationship with a woman.

Whatever changed him, Homer must have felt a need to escape. He traveled to Britain in eighteen eighty-one. He spent most of his time in the fishing village of Cullercoats, near New Castle. There he painted many pictures of life and events on and near the sea.

BARBARA KLEIN: Homer returned to the United States the following year. He settled in Prouts Neck, Maine. He would call it home for the rest of his life. His brothers, Arthur and Charles, both owned houses there. It appeared that Homer withdrew from social life. He avoided visits from people wanting to meet America's greatest living painter. 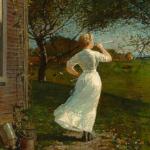 Winslow Homer's The Dinner Horn (Blowing the Horn at Seaside), 1870

But Homer's later life was also filled with travel, which provided subjects for his paintings. He visited warm places – Bermuda, the Bahamas, Cuba and the American state of Florida. He made several trips to fish and to paint. In these places, he used bright watercolor paints.

STEVE EMBER: Homer also spent time in the Adirondack Mountains in New York State. There he found rich subject matter in the people, hunters and wildlife of the area. But now, a new subject became more important in his work. As he grew older, Homer increasingly painted subjects facing death.

One of Homer's last paintings is called "Right and Left." It shows two ducks that have just been shot by a hunter as they fly above the surface of a wide expanse of water. The painting is named for a hunter's trick. It describes how a hunter can use both barrels of a shotgun to bring down two birds very quickly.

In the painting, the water and sky are grey. It is very early in the morning. If you look carefully at the painting, you can see two small points of the color orange. Looking closer still, you can see that one is a small part of a rising sun. The other is more surprising. It is the firing of the shotgun.

Almost hidden behind one of the falling ducks is the boat carrying the hunter. Here, Homer did something very unusual. The observer of the painting is directly in the line of gunfire.

BARBARA KLEIN: Winslow Homer died at Prouts Neck, Maine, in nineteen ten. He was firmly established as America's greatest painter of the time.