With Gadhafi Dead, What Does Future Hold for Libya?

Update Required To play the media you will need to either update your browser to a recent version or update your Flash plugin.
By VOA
2011-10-21 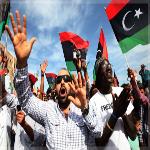 Photo: Reuters
Libyans celebrate at Martyrs Square in Tripoli on Thursday after hearing the news about Muammar Gaddafi

Moammar Gadhafi ruled Libya for forty-two years. He was killed Thursday after fighters loyal to the National Transitional Council, the NTC, captured him in his hometown of Sirte. People celebrated in Tripoli, including this engineer who gave only his first name, Osama.

OSAMA: "All the people go outside and they celebrate and feel so happy about the end of this Gadhafi's regime and everyone, even the families, the children, the old people, all are out to celebrate this moment. This moment is very happiness moment now."

Questions about how the Libyan leader died have raised the possibility of an international investigation. 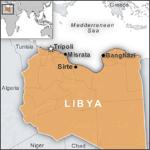 Moammar Gadhafi was twenty-seven when he took power in nineteen sixty-nine after a military overthrow of Libya's king. He once declared himself Africa's King of Kings.

This Nigerian social worker, Mary Ene, says other African leaders who want to stay in power forever should learn something.

MARY ENE: "This is a lesson to our leaders in this part of the world to know that power belongs to God and that God can take power from anybody anytime. It is time for our leaders to look beyond trying to grab all the things that belong to the public for their own pockets, for their own families."

Ugandan government spokesman Fred Opolot had some praise for the former leader. 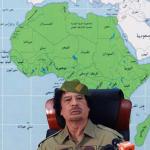 Moammar Gadhafi at a news conference in Tripoli in January 2008

In two thousand three, Colonel Gadhafi took steps to improve relations with the West. He admitted responsibility for the nineteen eighty-eight bombing of Pan Am flight 103 over Lockerbie, Scotland. That attack killed two hundred seventy people. He also rejected weapons of mass destruction and terrorism. As a result, the United States re-opened diplomatic ties with Libya.

The rebellion in Libya began in February in the eastern city of Benghazi. Colonel Gadhafi sought to crush the unrest. He refused to leave even as NATO planes began attacking his forces in March.

NATO says its air strikes likely aided in his capture. It says its planes had attacked a large group of vehicles that attempted to flee Sirte on Thursday. It says NATO officials did not know at the time that Colonel Gadhafi was in one of the vehicles.

NTC officials have said control of Sirte would begin a series of moves for elections, a new government and a new constitution.

President Obama said the United States looks forward to the quick formation of a government and to free and fair elections.

Mr. Obama added, "Without putting a single U.S. service member on the ground, we achieved our objectives, and our NATO mission will soon come to an end."