Update Required To play the media you will need to either update your browser to a recent version or update your Flash plugin.
By VOA
2011-6-29 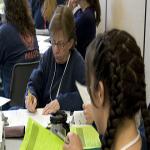 Getting a job can be especially difficult for someone with a prison record. So a prison training program in the American Northwest prepares women to start their own businesses.

The program is called Lifelong Information for Entrepreneurs, or LIFE. The training combines business and social skills. The women learn how to manage their time, set goals and settle conflicts peacefully.

Saresa Whitley is serving five years for assault at the Coffee Creek Correctional Facility, a women's prison in Oregon. She has a job waiting for her when she is released in January. But she also plans to start a small business with the knowledge gained from the months of class.

SARESA WHITLEY: "When I was talking about knowing if my business is viable or not, through a profit-and-loss model, I was like ‘Wow, I didn't even know the word viable before, and now I do.' I've learned a lot, I've learned a lot about how to write a business plan, about effective communications skills, how to listen, something I didn't know how to do before."

Cynthia Thompson is serving time for stealing someone's identity. She says the lessons learned in the program are important not just for the inmates, but also the communities they will re-enter.

CYNTHIA THOMPSON: "I think the goal of it is to produce people that are being part of the community, paying their taxes and being volunteers. Not just necessarily successful small businesses, but just successful, accountable people in the community."

DOUG COOPER: "We were looking for ways that we could apply our expertise around economic development and small business management to populations that could use it. It's identical to what we do internationally, except we apply it here in Oregon and Washington."

MercyCorps Northwest has just started a LIFE program at a women's prison in Washington state. Doug Cooper says he hopes the idea will spread to prisons throughout the country.

The group says just three of the one hundred graduates of its training program have returned to prison. Graduates of the LIFE program have started businesses like cutting hair and selling goods at farmers markets.

One woman who served time for theft now runs an automobile repair business. Lori does not want her last name used. She says she worries what people might think if they knew she had been in prison. Lori stayed in contact with a MercyCorps mentor after she left prison. Together they found answers to questions about running a small business.

LORI: "What works, what doesn't? And is it worth having a website of your own, and what avenues of advertising can you exploit for free? Those are the type of things that I found invaluable."

And that's the VOA Special English Education Report. You can read and listen to our reports, and post comments at 51voa.com. I'm Christopher Cruise.