Update Required To play the media you will need to either update your browser to a recent version or update your Flash plugin.
By VOA
2012-2-4 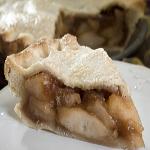 Nobody is sure where and when the expression apple pie order began. Some say that Scottish and English writers used the expression a long time ago. Others say it first was used in the northeastern American states known as New England.

The housewives of New England cut their apples in even slices. Then they filled pie pans with them in an organized way, row upon row. As one writer said, the women of New England loved to have everything in its place. This perhaps explains why it generally is believed that the expression apple-pie order began in New England.

Another old expression describes the opposite condition – wild disorder. That expression is apple of discord. It comes from ancient mythology.

The myth says that all the gods and goddesses were sitting around the table to celebrate the marriage of Thetis and Peleus. One of the goddesses, Discord, was a troublemaker. She threw a golden apple on the table to be given as a prize to the most beautiful goddess.

It was not an easy decision to make. How could they choose among Juno, Minerva and Venus. Paris was given the task of deciding. He decided to give the golden apple to Venus. Juno and Minerva were very angry and threatened him. This, the myth says, began the long Trojan war.

At one time, the tomato was called a love apple. That was a mistake. This is how the mistake happened.

In the sixteenth century, Spain imported the tomato from South America after Spanish explorers had landed there. Spain then exported the tomato to Morocco. Italian traders carried it on to Italy. The Italian name for the tomato was pomo di Moro – apple of the Moors.

When French growers imported it from Italy, they thought di Moro meant d'amour, the French word for love. And so pomo di Moro became the apple of love.

People believe many things about the apple. One belief is that it has great powers of keeping people healthy. A very common expression is "An apple a day keeps the doctor away."

Another belief is based on fact. The expression is "One rotten apple spoils the barrel." When an apple begins to go bad, it ruins all the other apples around it in the container. The expression has come to mean that one bad person in a group can cause everyone to act bad.

You have been listening to the VOA Special English program WORDS AND THEIR STORIES. I'm Warren Scheer.