Workers Continue Efforts to Prevent a Nuclear Disaster in Japan

Update Required To play the media you will need to either update your browser to a recent version or update your Flash plugin.
By VOA
2011-3-18 Photo: AP
Mother and daughter receive radiation scanning in Fukushima, northern Japan, one week after a massive earthquake and tsunami.

A huge earthquake and tsunami destroyed a large part of northeastern Japan last week. Survivors and rescue workers stopped for one minute on Friday to remember the hour when the earthquake struck.

The quake and tsunami killed at least six thousand people. More than nine thousand others are missing. About three hundred eighty thousand people have left their homes after they were heavily damaged or destroyed. Those displaced are now living in more than two thousand shelters.

There are shortages of food, water and fuel. Each day more roads are being reopened for trucks to take supplies to the survivors. But some communities remain cut off.

On Friday night, Prime Minister Naoto Kan spoke of the problems in a speech to the nation. The Prime Minister said he understands that people in shelters are cold and do not have enough food. But he said the government is doing all it can. And he said he hopes to return a sense of security to the survivors soon. 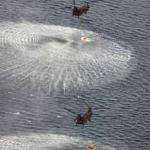 Mister Kan also said the crisis at the Fukushima Daiichi nuclear power center is the worst Japan has ever faced. He said police, firefighters and military workers were risking their lives to prevent a wider disaster. On Friday, workers continued to direct water on the damaged reactor buildings. It was an attempt to cool the highly radioactive fuel rods from overheating. Workers used powerful hoses to shoot fifty tons of water on the buildings. But the military and civilian firefighters had to keep their distance and limit the time they could be in the area because of the radiation.

Fires, explosions and a partial melting of cores have taken place at four of the six reactors at the Fukushima nuclear center.

On Friday, the government raised the severity rating of its nuclear disaster from four to five on a seven-point international nuclear event scale. Level five means an accident with wider results, including some release of radioactive material. It also means a high possibility of the material making contact with people.

In Washington on Thursday, President Obama said the United States will stand with Japan as it contains its nuclear crisis, recovers and rebuilds.

PRESIDENT OBAMA: "The Japanese people are not alone in this time of great trial and sorrow. Across the Pacific, they will find a hand of support extended from the United States as they get back on their feet." 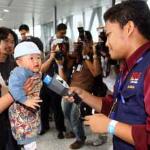 The president noted some of the steps the United States has taken to help.

PRESIDENT OBAMA: "Search and rescue teams are on the ground in Japan to help the recovery effort. A disaster assistance and response team is working to confront the aftermath of the earthquake and tsunami. The U.S. military, which has helped to ensure the security of Japan for decades, is working around the clock."

Mr. Obama said the military has completed hundreds of flights to bring food and water to Japan.