Update Required To play the media you will need to either update your browser to a recent version or update your Flash plugin.
By Brianna Blake
2011-8-21 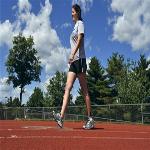 Photo: AP
In January, Russell will embark on a 7,000-mile, two-year trek across Africa in an effort to raise money to help provide clean drinking water for people in underdeveloped countries.

FAITH LAPIDUS: And I'm Faith Lapidus. This week on our program, we hear about some teenagers in Washington who brought art to life during their summer break. And we learn about a young American who is walking to raise attention and money for clean water in Africa.

STEVE EMBER: America's capital city has a summer employment program for young people that includes jobs at the National Portrait Gallery. Teens get paid to dress like famous people and perform for museum visitors.

FAITH LAPIDUS: Taylor Marsh is about to begin her performance.

TAYLOR MARSH: "A dollar fifty cents, small change, but it was all I had when I decided to start my very own school. Yeah, I know, you may see me and think, what's a colored female like me know about school? You see, I was born just after the Reconstruction period."

Taylor is dressed in a blue velvet suit and carrying a cane. She is playing Mary McLeod Bethune. Bethune was an American educator and civil rights leader who was born in eighteen seventy-five. That was just ten years after President Abraham Lincoln ended slavery.

STEVE EMBER: Ten students took part this summer in the "Portraits Alive!" program at the National Portrait Gallery. Like most of the students, Taylor Marsh came to the program because she is interested in theater.

TAYLOR MARSH: "I had no idea what this program was going to be about."

Taylor was told that they would be giving tours of the museum. But the tours given by the young people require acting skills. Geri Provost Lyons leads the program.

GERI PROVOST LYONS:"I look for students who are interested in the performing arts. They choose a portrait and they do research on the people that are in these portraits, and then they perform in costume a monologue which they have written."

Students spend their first four weeks preparing. Then they practice in front of each other before they perform for museum visitors.

FAITH LAPIDUS: Taylor Marsh was one of the few students who did not choose an entertainer or a movie star.

TAYLOR MARSH:"Writing the monologue was the hardest part."

TAYLOR MARSH: "It wasn't really the occupation I thought of, it was more the person in general. She was a strong woman, she had a lot of things going for her, and I wanted someone who was headstrong."

Sydney -- who was born in Washington, DC, or the District of Columbia -- says the program has had an effect on her.

SYDNEY HALL: "I don't spend a lot of time in museums. DC born and raised, and I've been to all the museums, but now I'm actually taking the time to learn."

FAITH LAPIDUS: Rashawn Alexander says she, too, now takes time to read about the artwork in the galleries. Geri Provost Lyons says this is true of a lot of the students in the program.

GERI PROVOST LYONS: "They will take time to go to different museums and learn more and want to see more."

Rashawn played Selena, the Texas-born Latin singer who was murdered in nineteen ninety-five at the age of twenty-three. Rashawn says she was impressed by how Selena gave back to the community, offering a free concert to students who improved their grades.

RASHAWN ALEXANDER: "I picked her because me and her have a lot in common. We both want to see kids do well in our community."

STEVE EMBER: In rural areas of Africa, millions of women and girls walk for hours every day to get water. Now, a twenty-two year old social activist in the United States is walking to raise money and awareness about the need for clean water.

AMY RUSSELL: "Right now I'm on my way to Bethany, Connecticut, in the midst of a one hundred forty mile walk across the state. It started in Granby and will end in Greenwich. Next month, I'm going to California."

FAITH LAPIDUS: In California her plan is to walk eight hundred kilometers. Ms. Russell is getting in shape for an even longer walk -- twelve thousand kilometers across Africa. She expects that to take two years.

Amy Russell founded the nonprofit organization Walk4Water three years ago while she was still in college.

AMY RUSSELL: "If I ever wanted to tackle any of these big social causes of our day, [I realized] that I'd have to start at the root of everything. And the root of everything looks like it was poverty. Then, when I studied poverty a little more, I realized that clean water is just at the base and the root of all that. You can't really have the rest of the development process of sanitation, education, all those types of things without having the basic necessity of clean water."

STEVE EMBER: That led to the idea of walking across Africa. Ms. Russell plans to start in January. She will be joined by volunteers from the United States and the African countries she will be walking through.

She says the team hopes to walk for about eight hours a day and raise eight million dollars for wells, water treatment systems and other projects. They also plan other activities along the way.

AMY RUSSELL: "Some of the places we're stopping at include orphanages, organizations that concentrate on sanitation, AIDS. We're also going to have a nurse with us. So, we're trying to set up some medical clinics as we go."

STEVE WERNER: "I think Amy and other people like her are heroes because they not only have seen the problem, they are taking action."

FAITH LAPIDUS: Steve Werner is a spokesman for the WASH Advocacy Initiative. That is another group working to expand access to safe drinking water and sanitation.

STEVE WERNER: "The more people who know that this is a problem, they will demand that this become a more important issue in our foreign priorities, for companies when they are making decisions about their international philanthropy. Other significant donors will learn more about the issue when they read stories about what Amy is doing."

Elisa Van Dyke knows all about walks to raise money for water projects. She has helped organize them for the past five years for Healing Hands International in Nashville, Tennessee. Those walks, and others around the United States, raise money to support the group's clean-water projects.

ELISA VAN DYKE: "We have drilled close to five hundred clean water wells throughout Africa and a few in Central America. So when we are able to put a well in a community that's just right outside their homes or right there in the middle of their village, girls don't have to spend a lot of their day collecting water. It can become a brief morning task or afternoon task and then they can go on to school."

STEVE EMBER: Ms. Van Dyke says providing everyone with access to clean water is a goal that can be reached. The first step is raising awareness, she says, and this is why Amy Russell's upcoming walk across Africa is important.

Steve Werner of the WASH Advocacy Initiative says he hopes the walk will get officials in developing countries to take more action.

STEVE EMBER: Our program was written and produced by Brianna Blake from reporting by Susan Logue and Faiza Elmasry. I'm Steve Ember.

FAITH LAPIDUS: And I'm Faith Lapidus. You can find transcripts and MP3s of our programs and learn English at 51voa.com. Join us again next week for THIS IS AMERICA in VOA Special English.