Young Haitians in Florida Learn About US Culture and Their Own

Update Required To play the media you will need to either update your browser to a recent version or update your Flash plugin.
By Alex Villarreal
2011-11-9 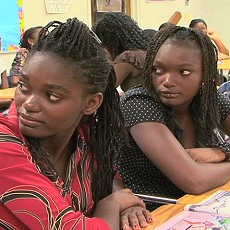 The state of Florida is home to one of the largest populations of Haitians outside of Haiti. The city of Miami has a neighborhood known as Little Haiti. People who live there keep close ties to Haitian culture.

Haiti is a former French colony. French is the main language used in schools there.

The center offers the classes through a nonprofit organization called the French Heritage Language Program. Not all of the students are Haitian. But for the ones who are -- including Dominique Domond -- the language has special meaning.

MARIE DOMOND: "Sometimes, he says, 'Mom, I want you to teach me how to speak your language.'"

Learning another language can also help them when they grow up. Martine Buissart is the Miami coordinator for the French Heritage Language Program, which is based in New York.

MARTINE BUISSART: "The more languages you speak, the more you can share, you can work. For work, it's very important."

The students were among thousands of Haitians who came to the United States after their country's powerful earthquake last year. One of those survivors is Kerby Edme.

KERBY EDME: "Right after I jumped to the other roof, the house collapsed."

The teachers have tried to help students like Kerby learn to live in their new culture.

KERBY EDME: "The teachers were very patient with us, because some of us, we didn't speak English before we came here."

Angel Almanzar, the principal of the school, says language was not the only problem.

Teacher Mathieu Daquin is himself Haitian. He says the classes have been good for the students from Haiti.

MATHIEU DAQUIN: "It's like Little Haiti within a school. This is where they feel at home."

For student Endieula St. Jean, that comfort is important.

ENDIEULA ST. JEAN: "When I came to the United States, I was very, very, very angry, nervous because I [couldn't] speak English. All I [could] say was 'good morning' and 'good afternoon.' That's all."

Another student, Paul Alceste Zamor, graduated earlier this year. He received the highest possible score on the college-level Advanced Placement test in French. But it was not immediately clear whether he would gain the immigration status required to attend college in the United States.

PAUL ALCESTE ZAMOR: "I want to be a good surgeon, and then go back to Haiti to help people there."

Other Haitian students, including Kerby Edme, say they share that goal of helping Haiti.

KERBY EDME: "Every Haitian, even [if] they weren't there when the earthquake happened, I think they have in mind to go [and be] successful and then do something for the country, even a little bit, because when it all comes together, it makes a big thing."