A Big Day for US Sports Fans

Update Required To play the media you will need to either update your browser to a recent version or update your Flash plugin.
By VOA
06 April, 2015


Millions of Americans will attend opening day of Major League Baseball, a league of professional baseball players, on April 6. Then, at night, millions of people will watch on television as Duke University and the University of Wisconsin battle for the National Collegiate Athletic Association (NCAA) basketball championship.

And the coaches and the professional baseball players will make millions of dollar to play the games.

Duke has won the NCAA basketball championship four times. If it wins again, it will tie the University of North Carolina and Indiana University for the most championships. Wisconsin was national champion once, in 1941. Monday's game is being played in Indianapolis, Indiana. 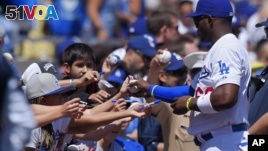 College basketball is a big money maker and a winning coach can earn huge amounts. According to USA Today newspapers, Duke coach Mike Krzyzewski makes the second highest salary in college basketball --- more than six million dollars a year. Wisconsin coach Bo Ryan is the tenth highest earner, at about three million. The coach of the team that wins the championship will get a bonus, or prize pay.

Professional baseball players also make a lot of money. The website Spotrac estimates the Los Angeles Dodgers with the highest salary record for 2015. The team's total pay adds up to more than $270 million. Almost $44 million will be paid to players who are no longer playing for the team.

The highest paid player in all of baseball is on the Dodgers. Clayton Kershaw will earn a base salary of about $30 million a year until his contract ends in 2021.

The New York Yankees held the highest payroll for fifteen years. Now, the team is second to the Dodgers, with a total for salaries at about $216 million.

The Associated Press says pay is up generally. It reports the average baseball salary on opening day this year increased more than six percent at $4.2 million dollars.

The Dodgers make big money and their fans reportedly make big messes. The team opens its season today at home in a game against the San Diego Padres.

Los Angeles police have already warned people about holding "tailgate parties" before the game in public parks near the baseball center. Apparently people who live in the area complained last year about baseball fans. They said baseball fans made a lot of noise, drank alcohol and ate in nearby parks before games. Then, the neighbors said, they left their trash behind.

In the midwestern state of Illinois, the Chicago Cubs opened the season Sunday night at home in a game against the St Louis Cardinals. The Cubs lost but the real disaster was the famous Wrigley Field. It is undergoing repair, which made for long lines at the bathrooms and other services.

Things are a little less wild in Washington, DC. The new Commissioner of Major League Baseball, Ron Manfred, threw out the first pitch at that game. The Nationals are playing the New York Mets.

Have you ever seen or played baseball? What do you think of the sport considered America's national pastime? Let us know. Post your thoughts in the comment section.

salary – n. an amount of money that an employee is paid each year

bonus – n. an extra amount of money that is given to an employee