A Common Form: Be + Adjective + Infinitive

Update Required To play the media you will need to either update your browser to a recent version or update your Flash plugin.
By Alice Bryant
13 February 2020


On a recent Everyday Grammar program, we talked about the phrase "be willing to." For example, you might say, "She was willing to travel during the rainy season." The adjective "willing" belongs to a group of more than 30 adjectives that are followed by infinitive verbs.

Adjectives followed by infinitives are the subject of today's Everyday Grammar program.

Listen to two sentences and decide which sounds better:

If the first sounds more natural, it is probably because you have heard infinitive verbs after the adjective "happy" many times in English. In the example, the infinitive is "to see."

"Happy" follows the structure be + adjective + infinitive. Other adjectives in this group include: easy, hard, careful, prepared, good, relieved and difficult. 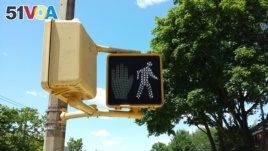 Are you careful to check if the sign says "walk" or "don't walk" before you cross a busy street?

Next, I have Jill Robbins joining me to demonstrate the grammar with a short exercise. Jill, I'll ask you a question and you answer it using an adjective followed by an infinitive verb. Are you ready?

Here's the first one:

Alice: Crossing busy streets in D.C. can be dangerous. What are you careful to do before you cross the street?

Jill: I am careful to put away my phone before I cross the street. I am also careful to check whether the sign says "walk" or "don't walk."

Good job! You used the adjective "careful" plus the infinitive verbs "to put away" and "to check" in your answer.

I noticed you used the adverb "also" in your second sentence. That's great! Adding an adverb is common in be + adjective + infinitive phrases since we often use them to express attitudes and feelings.

Alice: I noticed that you worked long hours yesterday. When you got home last night, what were you relieved to do?

Jill: I was relieved to take off my shoes. I was also relieved to sit down for dinner. Later, I was ready to sleep.

Very good! You used the adjective "relieved" followed by the infinitives "to take off" and "to sit down."

And I used the adjective "ready," which also belongs to the group of adjectives we're discussing today. I followed it with the infinitive "to sleep."

Let's do one more:

Alice: Some things in life are easy to do and some are hard to do. What is something that is hard to do?

Jill: It is really hard to change a habit.

You're right about that! It is hard to change habits.

Jill used the adjective "hard" followed by the infinitive verb "to change."

Notice that she started this sentence with the pronoun "It." When we use "it" in this way, the pronoun is not the true subject of the sentence. The true subject is the infinitive verb, but we do not speak this way. Consider these two examples. Which sounds more natural?

The sentence "It is hard to change a habit" sounds more natural, even though the true subject is "to change."

In English, we rarely begin sentences with infinitive verbs, except in some kinds of writing, such as poetry and other forms of literature.

By the way, if we wanted to write the sentence another way, we could replace the infinitive subject "to change" with the gerund "changing." Then the sentence becomes: "Changing a habit is hard," and "changing" is the subject of the sentence.

But for today's lesson, what's important is knowing you will see and hear sentences with be + adjective + infinitive everywhere. And they sometimes begin with the pronoun "It."

So, what can you do to practice?

Here's one idea: Try to become familiar with the 30+ adjectives that are followed by infinitives, without trying to memorize them. I will provide the list on our website.

Then, the next time you hear those adjectives in real life, in a song, on television or in a movie, listen for the structure we talked about today. Try to make note of the example in your phone or a notebook.

You can also practice writing your own sentences and using them when you speak English to friends or practice partners. With time and practice, you will be delighted to use the structure whenever you speak or write English.

Below is a list of the most common adjectives followed by infinitives.

relieved – adj. feeling relaxed and happy because something difficult or unpleasant has been stopped

habit – n. a repeated behavior, especially one that is hard to give up

practice – v. the do something again and again in order to get better at it