Williams vs. Osaka: A Dream Match at the US Open

Update Required To play the media you will need to either update your browser to a recent version or update your Flash plugin.
By Hai Do
07 September, 2018

Across the net will be 20-year-old Naomi Osaka. She has already made history of her own; she is the first Japanese woman to reach a Grand Slam tennis final.

At important points during that match, Osaka said she asked herself, "What would Serena do?" Then, she served aces just like her idol would.

Osaka said of Williams after that match, "She's the main reason why I started playing tennis." 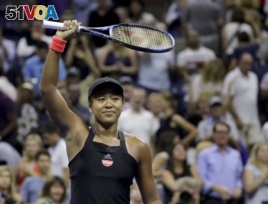 Osaka was born in Osaka, Japan, to a Japanese mother and a Haitian father. She holds both Japanese and American citizenship. But she has chosen to compete for the Japanese Tennis Association.

"I can understand way more Japanese than I can speak," Osaka told reporters at USA Today. "And when I go to Japan people are confused. From my name, they don't expect to see a black girl."

Osaka beat former U.S. Open champion Samantha Stosur of Australia in 2014, not long after becoming a professional. And in last year's U.S. Open, she defeated defending champion Angelique Kerber in the first round.

After her victory, Osaka was asked how she was able to play well at several critical moments of the game. She said, "This is going to sound really bad, but I was just thinking I really want to play Serena."

Osaka added, "I always dreamed that I would play Serena in the final of a Grand Slam."

Williams has won 23 Grand Slam titles, including seven U.S. Open championships. She missed the 2017 U.S. Open because she gave birth to her daughter on September 1. Williams then had to take time off from tennis because of her difficult birth experience.

A win Saturday would be Williams' first Grand Slam title as a mother. It would also give her a record-tying 24 Grand Slam victories. Australia's Margaret Court currently holds the record.

After her win on Thursday night, Williams said, "No matter what happens in any match – semis, finals – I just feel like I've won already."

Williams' first Grand Slam title came in 1999 at the U.S. Open. At the time, Osaka was not yet two years old.

Osaka gave a simple answer when asked what her message is to Williams ahead of Saturday's final.

Hai Do wrote this story for VOA Learning English. Ashley Thompson was the editor.

title - n. the position of being the champion in a sport

ace - n. a point scored on a serve that an opponent fails to hit in tennis

runner-up - n. a person or team that finishes in second place