Update Required To play the media you will need to either update your browser to a recent version or update your Flash plugin.
By Bryan Lynn
22 December 2021


As new technologies progressed over the past year, some words used to describe them rose in popularity. Here is a look at some technology terms that gained wide attention during 2021. 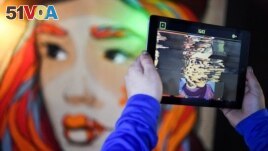 In this file photo, hands holding a tablet computer are pictured during a tour through the urban NFT LAB called "GAME OVER" by the artist group Die Dixons (aka XI DE SIGN) in Berlin, Germany, on October 6, 2021. (REUTERS/Annegret Hilse/File Photo)

Major tech companies began talking more about the "metaverse." The term describes a non-physical world in which individuals can interact through different kinds of virtual technology.

For example, a metaverse could permit people living on different sides of the world to meet up through technology and virtually go on a vacation, play sports or work together on projects.

The main technologies that would drive such a world would be virtual reality, or VR, and augmented reality, AR. Other, yet-to-be invented technologies would also be used to improve experiences within the metaverse.

NFT stands for non-fungible token. It is based on a technology called blockchain, which is also used with digital currencies known as cryptocurrencies.

An NFT can be attached to a piece of digital artwork or other things existing in digital form. The NFT can be used to provide proof that the pieces are real. While anyone can view the work, the buyer has official ownership rights over the pieces.

In March, an NFT created by American artist Beeple sold for nearly $70 million at Christie's. It was the first sale ever by a major auction house of art that did not exist in physical form.

Web3 is used to describe a possible next stage of the internet: a decentralized internet run on the record-keeping technology blockchain.

This model would permit users to hold ownership over their presence and control their own data on the internet. Today's internet, known as Web2, permits major technology companies like Meta's Facebook and Alphabet's Google to provide services in exchange for user data.

The term decentralization became widely used in the tech industry. It describes a process that aims to reduce the amount of power companies or governments have over technology platforms. The idea is to hand this power over to users.

GameFi is a term that describes the process of gamers earning cryptocurrency through playing video games. An example is when players earn financial tokens, or awards, for winning battles in the games.

The word altcoin covers all cryptocurrencies other than Bitcoin. This ranges from Ethereum -- which aims to support a future financial system – to Dogecoin, a digital currency that began as a joke, but was later popularized by Tesla chief Elon Musk.

virtual reality – n. digital environments that can be entered and controlled by humans

augmented reality – n. a technology that can project computer-created imagery onto special eyeglasses.

platform – n. something that permis someone to tell a large number of people about an idea, product, etc.

app – n. a computer program that carries out a specific job

fabrication – n. the act of producing a product