A Half-British, Half-American Royal Baby on the Way

Update Required To play the media you will need to either update your browser to a recent version or update your Flash plugin.
By Caty Weaver
15 October, 2018

Another royal baby is on the way.

Markle had been wearing looser clothing for several weeks. Then, on Friday, she wore a large coat to a royal wedding. Media reports quickly spread that she was possibly trying to hide signs of a pregnancy. 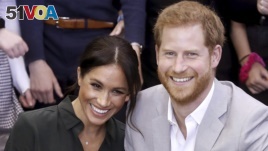 The couple has been married almost five months. Their wedding ceremony last May in Windsor, England was a hugely popular televised event.

The Duke and Dutchess are currently in Australia at the start of a 16-day trip that will also include visits to Fiji, Tonga and New Zealand. The pregnancy news came out shortly after they landed in Sydney. It set off a series of congratulatory posts on social media sites.

Many people are also guessing the sex of the baby, making lists of possible names and discussing the possibilities for its future in public service.

Some guesses are funny. American journalist Greg Pollowitz posted that the child will be an American citizen and might run for president someday.

He wrote, "Congratulations to Princess Meghan and Harry, and to the #RoyalBaby who will one day rule the Great American Empire."

royal --adj. of or related to a king or a queen

coat --n. a piece of outer clothing that can be either long or short that is worn to keep warm and dry