Update Required To play the media you will need to either update your browser to a recent version or update your Flash plugin.
By Gregory Stachel
15 June 2022


Until 20 years ago, the Penuelas Reservoir was the main water supply for the city of Valparaiso on the coast of central Chile.

But today, it is almost dry. A huge open area of dried earth that was once the lake bed is now covered with fish skeletons and animals looking for water.

The South American nation is facing a 13-year drought. Higher air temperatures have meant snow in the Andes Mountains is less dense. So, it is melting faster or just drying up. The snow in the mountains once provided important meltwater during the spring and summer. 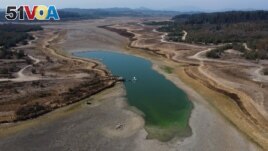 A view of the almost-dry Penuelas lake in Valparaiso, Chile on April 19, 2022. (REUTERS/Ivan Alvarado)

The capital, Santiago, has also been affected. Officials there are making plans to place limits on water use because of disputes between the mining and farming industries.

Amanda Carrasco is a 54-year-old who lives near the Penuelas Reservoir. She said, "We have to beg God to send us water." She added, "I've never seen it like this. There's been less water before, but not like now."

Jose Luis Murillo works at ESVAL, the company that supplies Valparaiso with water. He said the reservoir needs rainfall and that it "is just a puddle" now. A puddle is a small area of water. He added that, years ago, the Penuelas Reservoir "was the only source of water for all greater Valparaiso."

Duncan Christie is a researcher at the Center for Climate and Resilience in Chile. He said research on trees suggests that conditions are drier than they have been in about 400 years.

A 2016 study by weather scientists suggested that low-pressure storms from the Pacific Ocean bring rain and snow to Chile in the winter under normal conditions. That weather activity brings snow to the Andes Mountains.

Miguel Lagos is an engineer and a water specialist. Lagos said the top layers of mountain snow are melting faster than in the past or are turning straight into a gas, or vapor, through a process called sublimation. Normally, he said, snow builds up, creating new layers. This helps keep the area colder for a longer period of time.

In 2019, a group of researchers from Chile published a study about the country's drought in the International Journal of Climatology. Their research covered the period from 2010 to 2018. The researchers found that both natural and human-caused forces were affecting the huge drought in Chile. But they warned that heat-trapping gasses in the atmosphere and similar problems "will keep pushing Central Chile toward a dry condition" for many years.

Researchers at the University of Chile predict the country will have 30 percent less water over the next 30 years. That prediction is based on mathematical models and historical data.

Lagos said, "What we call a drought today will become normal."

ration – n. a particular amount of something (such as gasoline or food) that the government allows you to have when there is not enough of it

beg – v. to ask (someone) in a very serious and emotional way for something needed or wanted very much

source –n. the place where something comes from or where it starts