Update Required To play the media you will need to either update your browser to a recent version or update your Flash plugin.
By Bryan Lynn
10 January, 2019


Each year, the Las Vegas consumer electronics show, or CES, presents the latest developments in many areas of technology.

It is the place to be for people who cannot wait to get a look at the newest products designed to make our lives easier, fun and more productive. The four-day event covers areas such as computers, health, transportation, agriculture and sports.

As this year's show comes to a close, we have put together a list of some of the most interesting products introduced at CES 2019.

A car with legs

It has become common for auto manufacturers to use CES to show off some of their latest technology and experimental vehicles.

One of this year's presentations was by South Korean carmaker Hyundai. The company introduced a small model of a "walking car," which it calls Elevate. It has four movable legs that can raise the main part of the vehicle high off the ground. 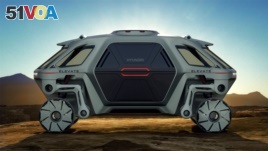 The electric-powered vehicle is designed to be used in search-and-rescue operations during emergencies or natural disasters. Hyundai says the Elevate can effectively travel over rough roads and land, while keeping passengers inside safe and still.

Germany's Mercedes presented an experimental self-driving vehicle that it claims can revolutionize transportation for people and goods. The company says the vehicle, called Vision Urbanetic, will be able to easily change bodies depending on its desired use. Mercedes says as a ride-sharing vehicle, the futuristic-looking car can seat 12 people. For transporting goods, a different two-level body can be used to carry many loaded containers. 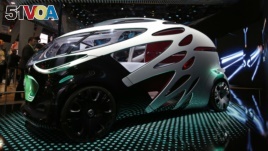 American manufacturer Harley-Davidson showed off its first fully electric motorcycle, called LiveWire. The company says the bike will be able to go 177 kilometers between charges. It can reach 96 kilometers per hour in under 3.5 seconds. Although Harley is known for building powerful bikes with huge, loud motors, the LiveWire will be unusually quiet. "The loudest sound you hear will be your heart racing," the company said. The motorcycle will sell for just under $30,000 when it becomes available in August 2019.

German car maker BMW demonstrated a self-driving motorcycle. And aircraft company Bell presented an experimental version of its Nexus self-flying air taxi. The company has said its flying vehicles could be transporting people around cities by the mid-2020s.

In keeping with past shows, there were several new robots introduced at CES 2019. One, called Temi, is really just a computer tablet on wheels. It is designed to be a personal electronic assistant. It moves around the home and performs commands when spoken to. It can link users to friends through voice or video, connect to video or place orders for food or goods.

Another, called Lovot, was created by a Japanese developer. It is small, soft and furry. With large eyes and two small arms, Lovot moves around and reacts to human interaction. The creators say their goal was very simple: to make a robot that makes people happy by increasing levels of comfort and feelings of love.

Another kind of robot got a lot of attention at CES this year for making one of America's favorite foods, bread. The BreadBot is a machine designed to completely make bread on its own. Creators of the robot baker say it can produce 10 loaves of bread an hour. The machine is designed to be placed in food markets where people can watch the bread-making process before they buy.

Another "fun" robot showed off its ability to make pictures on the wall. The Scribit machine is a small printer that can reproduce images chosen by users. The designers say the robot can also quickly remove the images or reproduce them any time.

French startup company EnergySquare introduced what it describes as a "universal wireless charger" for laptop computers. The system works by attaching a small piece to the bottom of the laptop that also connects to the computer's charging port. The user can then place the laptop onto the company's charging surface to recharge the computer. 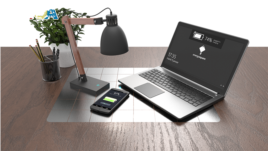 A new exercise machine by the U.S.-based company SportsArt is designed to help people stay fit and also generate electricity. The Verde G690 treadmill uses people to operate instead of a motor. The company says the machine can capture up to 200 watts of power per hour from human energy.

Another machine, the VR Bike from NordicTrack, uses a virtual reality (VR) attachment to transport exercisers through imaginary environments. For example, it permits fitness fans to feel like they are flying while exercising with the machine.

U.S.-based Watergen presented a self-producing water machine designed for home or office. Its Genny water generator draws water from the air and cleans it for drinking. The company says the machine can produce up to 30 liters of water per day.

A group of inventors showed off their new pet product – an automated toilet for dogs. Creators of the Inubox say the device is the first fully self-cleaning solution to capture, process and store dog waste effectively and smell-free. 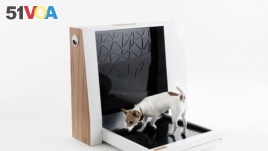 The inventors of Inubox say they hcreated the first device for dogs to capture, processes and contain dog waste with a fully automated process. (Inubox)

And finally, a French company introduced a toothbrush it says can "perfectly" clean a person's teeth in just 10 seconds. The Y-Brush by FasTeesH is a mouthpiece shaped just like human teeth. It has numerous small brushes to clean all teeth at once.

What are your favorite products from this year's CES? Write to us in the Comments section, and visit 51VOA.COM.

furry – adj. covered with fur or something that fells like fur

loaf – n. piece of bread that has been baked in one large piece

toilet - n. a large bowl attached to a pipe that is used for getting rid of body waste