Update Required To play the media you will need to either update your browser to a recent version or update your Flash plugin.
By Alice Bryant
09 June 2020


As bars across Europe slowly reopen, as many as one million free or pre-paid beers are waiting to welcome back the public.

Large and small beer companies have made it possible for people to buy drinks in advance to support shuttered bars. In some cases, the reward is some free beer when the doors reopen.

Anheuser-Busch launched its first voucher campaign in Belgium and has since sold over 200,000 beers. It also started a similar voucher campaign in 20 other markets across Europe and from Brazil to Hong Kong, raising over $6 million for bars and restaurants.

The number of drinks Heineken has sold through its many voucher campaigns is at 270,000. 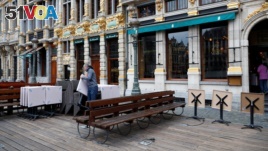 An employee prepares the terraces of a bar in central Brussels, as the country began easing lockdown restrictions following the coronavirus disease (COVID-19) outbreak in Belgium, June 4, 2020.

Now that bars are reopening, consumers have had their first chance to bring in their vouchers.

Two friends, Arendse Rohland and Thomas Hoffner Lovgren, were among those to get free beers after bars reopened in Denmark on May 18.

Through its campaign, Danish beer company Carlsberg offered free beers in a bar to consumers who bought bottles or cans from stores. The idea was to bring drinkers back with free drinks and hope they would then buy more. Hoffner Lovgren and Rohland both seemed willing to do so.

"I rarely only drink one beer," Roland said after collecting a free drink at a bar in a town outside Copenhagen.

Drinkers elsewhere are now in line. On Tuesday, France became the latest nation to reopen bars and restaurants. The Netherlands did so the day before. Ireland, Belgium and Britain are expected to follow this month and next.

Julian Marsili is with Carlsberg. He said its campaign would continue into the summer.

Marsili said since there will not be much travel outside Denmark for a while, the company is encouraging people to explore bars throughout Denmark.

The campaigns have helped, but not corrected some losses. In Britain, the British Beer and Pub Association (BBPA) said pubs could have recorded their best April in ten years, selling 745 million glasses of beer because of unusually warm and sunny weather.

Beer sales in stores have risen, but well below the rate of other alcohols, like wine and liquor, and not enough to fix the loss of in-person drinking. That information comes from Nielsen, a marketing research company.

Reopened bars and restaurants will clearly not operate as they did before the coronavirus measures. There will be limited time at the bar, less table service, shorter hours and measures to lessen contact between workers and consumers and to keep consumers apart.

She said social distancing rules make a big difference. Two metres, currently used in Britain, might permit only one-third of Britain's 47,000 pubs to reopen. But a one-meter rule, considered safe by the World Health Organization, would permit 75 percent to operate, she said.

Beer companies have also been helping with some of the new materials needed for health safety, learning from China, where restaurants and bars reopened from March.

She said Anheiser-Busch's Asian operation had sent "welcome kits" to smaller bars to help them separate groups of consumers. The kits included things like plastic separators, hand cleaner, facial coverings and advice to 50,000 bars and restaurants across China.

Craps said the kits were being reproduced in many other countries, such as the Americas where the company has its largest markets.

A study of British pub-goers found 93 percent were willing to revisit their local bar and over a third plan to visit within a week of reopening. Most also wanted to stay two meters away from strangers.

Business will not return as before. Belgian cafe and restaurant owners expect on average 45 percent fewer visitors as a result of social distancing measures and public concerns.

bar - n. a building or room where alcoholic drinks and sometimes food are served

voucher - n. a document, receipt, stamp or something similar, that gives evidence of purchasing something.

pub - n. a building or room especially in Britain or Ireland where alcoholic drinks and often food are served

kit - n. a set of tools or supplies that a person uses for a particular purpose or activity